GAME 162: Today the Red Sox conclude the 2015 season with the last of a 3-game set in Cleveland…Boston opens the 2016 regular season exactly 6 months (totaling 183 days) from today on April 4, right back here in Cleveland. 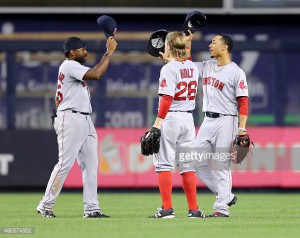 HONORING KAISER: Today, batboys for all major league clubs are wearing the initials “KC” on their wrist bands in honor of Kaiser Carlile, who died at the age of 9 on August 2, 2015, the day after he was accidentally struck by a bat during a game…Kaiser was the batboy for the Liberal Bee Jays summer team in Liberal, Kansas.