Nothing But Can’t Sleep Love For Pentatonix at Xfinity Center

In support of Top Pop Vol. 1

As the giant, white sheet rose into the air concealing the stage, I knew that Pentatonix would be emerging very shortly. With bright, white lights flashing in a staccato, anticipatory rhythm, the implied countdown began, making the eventual drop all the more dramatic and thrilling.  Five nearly ethereal beings in bright red, glittery ensembles were revealed standing in the shadows, and that’s how they opened up with their first song, one of their power-pop originals, “Sing”. 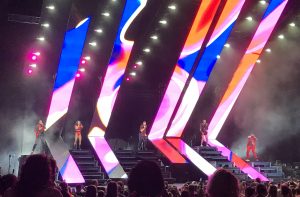 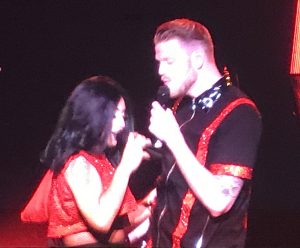 This quintet with machine-like accuracy and energy is comprised of Scott Hoying (baritone lead), Mitch Grassi (counter-tenor lead who hit some INSANE highnotes on many occasions), Kirstie Maldonado (mezzo-sopranos lead), Kevin Olusola (beatbox/vocal percussion), and Matt Sallee (bass lead). They were formed in 2011 on NBC’s show Sing Off, going on to win the entire show and secure a recording contract with Sony Music. And after seeing them live, now I know why. In case it wasn’t already implicitly clear, there are NO INSTRUMENTS besides vocals in this band. Kevin can play cello and beat box simultaneously, but that’s a completely separate thing. The band, as a whole, is completely vocals-based. All “instruments” heard are from their combined collaborative singing styles and harmonies. That revelation honestly blew my mind, both the first time I heard them on TV, as well as live. Given that live shows are typically just a completely different entity than most other mediums, I considered the possibility that there might be some kind of backing track or pre-recorded addition to the set. But there never was – these people are as fluent and well rounded as any band, just with their voices.

There were two opening acts at this show in support of Pentatonix’s upcoming album Top Pop Vol. 1, which were Calum Scott and Echosmith. I haven’t heard much about Calum prior to tonight, but I did recognize his soulful and emotional song “You Are The Reason” from his radio-popularized duet with Leona Lewis. On the other hand, I was actually quite familiar with the family band Echosmith, who I had been vaguely aware of since hearing their hit song “Cool Kids” on the radio when it debuted in 2013. Though not a die-hard fan of either of the opening acts, I truly enjoyed seeing both display their talents and thoughtful music with the crowd – they are both something very special.

Of course, the idea of acapella is nothing new, but the way this band does it is fresh and reinvented. In other embodiments of the concept, it always seems a bit stuffy and amateur, like something a high school glee club would do for a variety show. This is absolutely not the case for Pentatonix – they have reinvented what pop music can become, giving it a stripped-down makeover with twice the pomp and circumstance. 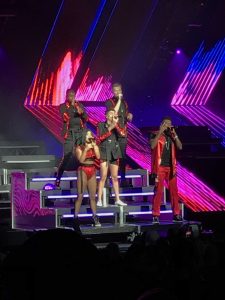 After the opening song ended, the band did a couple covers, like Bruno Mars’ “Finesse” and Charlie Puth’s “Attention”, but I especially loved hearing their original song “Can’t Sleep Love” that I was familiar with from its radio play in 2015.  The song has some clear doo-wop influences mixed with the poppy R&B feel that the band has come to do so well. Not only have they carved out a really clear niche for themselves, but Pentatonix also creates great original content that connects with their listeners on a very personalized level. This song is about looking for the kind of love that keeps you up at night in the best way, and how rare that is to find. For anyone who is a lovesick, hopeless romantic (like myself), they will find this song to be a comforting hug and a pat on the back, offering hope when it seems like there is none to be had.

The concert continued with some more covers, such as Camilla Cabello’s “Havana”, Ed Sheeran’s “Perfect”, and Luis Fonsi’s “Despacito”, just to name a few. Given how popular these covers are, it was a risky endeavor for the band to take songs that are already so developed in the minds of the audience, but they injected their own spin onto them quite well. I actually even had the pleasure of seeing Camilla Cabello perform “Havana” at Taylor Swift’s Reputation tour earlier this summer, so it was fun to compare the Pentatonix version with what I had seen from the original artist already. 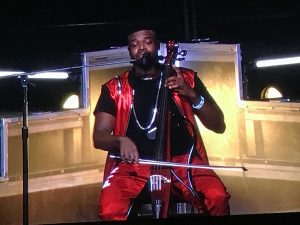 After those covers, the band took a break and Kevin did some “celloboxing” solos, which is a vastly impressive feat, all on its own – it needs no real description. But just imagine beat boxing, and playing cello at different rhythms, rates, and styles. He seemed more like a robot than a human, doing two things at once that shouldn’t be able to exist together but somehow do in the strange and wonderful world that Pentatonix creates in their stage show. I’d compare it to Wonderland, but there was a distinct lack of cantankerous flowers and pipe-wielding caterpillars.

Honorable mentions would go to their Rihanna medley, which I thought was a stand-out performance due to how quickly they would seamlessly switch into the next song without missing a beat (quite literally). It is allegedly reported that they switch songs a whopping 38 times for this arrangement, which is nothing short of bizarre in the best way. My favorites were “Disturbia”, “We Found Love”, and “This is What You Came For”. They also did a beautiful, practically heavenly rendition of Leonard Cohen’s “Hallelujah”, which is a classic, but quite a bit different from the pop/R&B selections of the rest of their musical catalogue. Their costume change from the red, sparkly ensembles to gold and elegant outfits seemed to symbolize this thematic shift into something new and emotional in a different way. 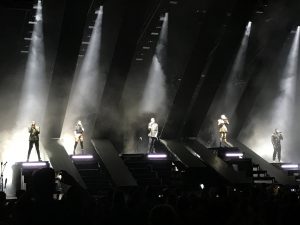 As the show came to a close after some more covers such as Demi Lovato’s “Sorry Not Sorry”, the band disappeared momentarily, only to reappear for an encore performance that they admitted that they had wanted to do for a while, but had fallen prey to the enormity of the piece and the pressure that it holds. That song, the one that had haunted them for as long as it did, was Queen’s “Bohemian Rhapsody”. This song is a monster – there are so many changes, layers, and dynamics to it which make it challenging enough to properly play with instruments. But with just exclusively vocals? That, my friend, is how you close a show. The harmonies, in this song especially, are on full display, with even the complicated guitar riffs mimicked with freakish accuracy.

Redefining the general perception of what defines a band, with ridiculous skills and amazing stage presence and energetic choreography, Pentatonix is a band to watch. But at the end of the day, it’s important to remember that they’re still human, after all. One of my colleagues is even very good friends with Matt, which is not only very cool, but it reminds me that they are not only talented artists, but also people, first and foremost. They have been climbing the ranks as of late since their original appearance on TV, and I have no doubt that they are going to continue to do amazing things – “celloboxing” is just the beginning.