Nobody does it better, Brady & Belichick are officially the best of all time 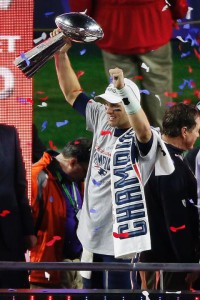 To hell with the haters, and doubters be damned, by winning their fourth Super Bowl Championship, Bill Belichick and Tom Brady have solidified their claim to the best to have ever done their jobs in the history of the National Football League.

Mea culpa to all those who never lost hope, but truth be told, I, like many others, was writing their obituary at the start of the fourth quarter.  But there is a reason why they are the greatest coach/quarterback tandem to ever coach/play the game.  In fact, they are quite likely the best tandem to ever dominate any professional sport ever.

Forget about the Mount Rushmore of sports, Brady and Belichick took it to a new level last night, piercing the rarefied air of greatness, going where no nearly perfect pair has ever gone before.

Think about this for a second, before there was the Hoodie and TB12, the high water mark of this franchise was getting beaten by the Green Bay Packers in Super Bowl XXXI, while their coach was literally plotting his escape to the New York Jets in his hotel room prior to the game.

They were the Patsies, the Pathetic Patriots, and any other derogatory spin off of the name that at the time represented the term “loser” when it came to professional football.  Now, some 14 years since Mo Lewis almost ended Drew Bledsoe’s life in the toilet bowl that was Schaefer/Sullivan/Foxboro Stadium, the fans of New England have been witness to the greatest dynastic run the NFL has ever seen.

And yes, it is a dynasty, regardless of the time between championships.  One can argue that if Bill Belichick the GM didn’t seemingly try to change his last name to Polian in the years between 2006 to 2014, we might be talking about 7 Super Bowl titles instead of 4, if you want to be honest.  But that is a story for another day.

If you think about it, was there ever a better end to the story than what the Patriots wrote on Sunday?  Surrounded by the maelstrom that was the trumped up charges of Deflategate, and facing a fourth quarter deficit of 10 points, Tom Terrific and the Hated One took charge of a comeback for the ages.

Only legends do what they did last night, grasping victory from the jaws of defeat, and thereby taking a hammer and chisel to the stone of NFL history, carving their names as big a John Hancock’s signature on the Declaration of Independence in the annals of the game, for future generations to look at in admiration and wonder.

Breathe deep Patriots Nation, for you are now witnessing greatness that will never be seen again.  Bobby Orr is not walking through that door, neither is Bill Russell, Bob Cousy, Phil Esposito or Ted Williams.  This is a place few get to go to in their sporting life, and you have been lucky enough to live through nearly a decade and a half of greatness since 2001.

It is hard not to be spoiled by such a run, not only by this tandem, but by the professional sports in this region as well.  There is a reason the rest of the country hates us.  And while we dig ourselves out of yet another winter storm, the championships continue to pile up like freshly fallen snow.

The end may be in sight, but it is not quite here.  Tom Brady and his avocado ice cream still have a few good years left.  Meanwhile, Bill Belichick will soon be in his lair on Route 1, finding loopholes to exploit in the NFL rulebook.

To hell with the haters, and doubters be damned, the greatest franchise in NFL history resides in Massachusetts, and the coach and quarterback will forever be known as the greatest dynamic duo ever.

Get the duck boats, or dog sleds ready, it’s time for another championship parade in Boston.  Like Tom Brady, this never gets old, does it? 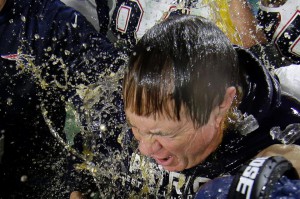