Next up for Patriots….a visit to Buffalo

FOXBOROUGH- Despite numerous injury concerns from this past weekend, the New England Patriots had a full squad at practice on Wednesday afternoon and seem to be ready for an undefeated Buffalo team come Sunday. 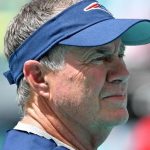 During their practice on Wednesday, the Patriots had full participation which included some players that were beat up during Sunday’s game vs. the Jets. Receivers Julian Edelman (chest) and Josh Gordon (hand) along with linebacker Dont’a Hightower (shoulder) were all back at practice.
On a day in which the Patriots added some quarterback depth to their roster, Tom Brady (calf) was also a full participant. Cody Kessler, a former Browns, Jaguars, and Eagles quarterback was added to the Patriots 53-man roster mainly for depth. The former two-man QB rotation includes rookie Jarrett Stidham who looked shaky during last week’s blowout win against New York.
When asked about his limited participation in practice, Tom Brady added “Football is a contact sport. I wouldn’t say I’m a spring chicken anymore.”
In the midst of losing key offensive weapon James Develin, Patriots running back James White returned to the team after watching last week’s game at home with his wife and newborn child Xavier. When asked about his baby, White said “it was a definitely very exciting, cool experience being able to watch the game with family but it was very weird watching the team play without being there.” White says “teammates were very supportive,” and that he “couldn’t scream at the TV because the baby was asleep.”
For this weekend’s matchup against Buffalo, many Patriots stars are focused on limiting the strong Defense that is a key part of the undefeated Bills team.
“They’ve been ranked up there for a while now. I think they’re good at all levels and that’s the challenging part… They have a good front, very good at linebacker, very good in the secondary and they play the pass well. Tough, physical, stout defense. It’s pretty tough and a great challenge,” said Brady.
Head Coach Bill Belichick also had high praise for Buffalo saying “They’re very well balanced, they provide a variety of pressure packages, they mix it up, [the Bills] lead the league in defense last year and have one of the best defenses in the league.” Belichick also said that the Bills are great upfront, they don’t make mistakes and that the Patriots must execute “like we always do.”
The Patriots come into this Sunday’s game as 7 point favorites over the undefeated Bills.
Kevin Harriman
Permalink
Patriots
Bill Belichick, Patriots, Tom Brady
No comments
297
0
0