NESN, Werner just don’t get it ! 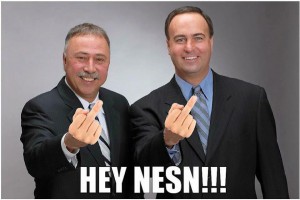 Let me start with this: NESN Chairman Tom Werner is an imbecile! An hour ago, NESN released a statement that could only be described as clueless.

On Sunday, the Red Sox played a video tribute to Don Orsillo in the 7th inning. Orsillo, who was for all purposes, fired by NESN in August when they told him quietly that his contract would not be renewed, was touched by the out-pouring of affection. NESN chose not toad the tribute further infuriating fans at home. Ch 5’s Mike Lynch reported that a message was sent out by NESN telling those involved to NOT show the video tribute on air.

The backlash was swift. Fans chimed in voicing their disappointment and frustration

The following was sent out by NESN regarding their plans to honor longtime announcer Don Orsillo in the final game of the season.

“Yesterday’s Don Orsillo tribute by the Red Sox was designed to be an in-ballpark celebration for the fans in attendance,” the statement read, referring to the team’s tribute to the broadcaster at Fenway Park on Monday – which, to the displeasure of viewers, was not televised.

“NESN already had separate plans underway to recognize Don during our last telecast of the season this Sunday (Oct 4). We look forward to celebrating Don’s career at NESN throughout that game.”

Here’s a few questions for Mr. Werner:
1) Why would you honor a man you fired because you needed “more energy”
2) After you chose not to show the Red Sox video tribute on Sunday…because you had your own celebration planned….why not show both ???
3) Do you really think Red Sox/Boston Fans are dumb enough ti believe your crock of shit ?

The second half of the Red Sox/NESN season have been plagued with mis-steps, poor decisions and an absolute total disregard for the fans who pay big bucks to go to Fenway and watch NESN.