An Interim General Manager will not be named at this time and the search for a new hire – which will be led by Bruins Chief Executive Officer Charlie Jacobs and Neely – will begin immediately. The Bruins current Assistant General Managers, Player Personnel Staff and Coaching Staff will remain in place at this time.

Jacobs and Neely will hold a press conference today at 3:00 p.m. 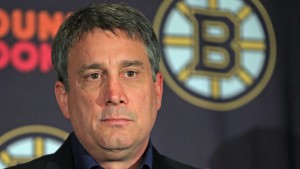 “We are grateful for Peter’s service to the Bruins organization over the last nine seasons,” said Neely. “His efforts undoubtedly helped the team achieve great success during his tenure and he helped restore the proud tradition of Boston Bruins hockey. We ultimately feel that this change is necessary in order to ensure sustainable success for the club both in the short term and the long term. Our search for a new General Manager will begin immediately.”

Chiarelli served as General Manager for nine seasons, after being named the seventh GM in club history on May 26, 2006.

Chiarelli’s overall regular season record as the team’s General Manager stands at 386-233-85, with his teams topping the 100-point plateau on four occasions and qualifying for the playoffs seven straight years from 2008-2014. His regular season record includes the third and fourth best seasons in club history with a 116-point campaign in 2008-09 (earning him The Sporting News NHL Executive of the Year honors) and the 2013-14 season’s 117-point mark with the 54 wins, tying for the second-most single season victories in club annals.

He also served as an Assistant General Manager and won a Gold Medal for Team Canada during the 2014 Olympic Games in Sochi.