Missing the playoffs just might be best for the Bruins 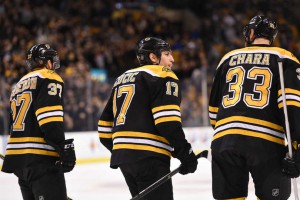 Reality bites, and right now for the Boston Bruins, that reality is pretty stark.  Losers of their last three games, head coach Claude Julien’s team is teetering on the edge of obscurity as the season winds down.  The last playoff spot – thought to be a near lock just a week ago – is now in danger of being stolen by a team that has found a new life, courtesy of a rookie goalie simply known as the Hamburglar.

Last night’s 6-4 loss at the hands of the Ottawa Senators, and the man that is inspiring a renaissance of sorts for a 1970’s character from a popular series of McDonald’s advertisements, Andrew Hammond, aka the Hamburglar, leaves the Bruins just two points ahead of the surging Sens, who have a game in hand on the B’s.  And based on the way the team has played during their most important stretch of games during the season, it is not unrealistic to think the Bruins may find themselves on the outside looking in when the playoffs start in April.

Believe it or not, that may be the best thing that could happen to them.

It is one thing to love your team and root for them to win, it is another thing to throw your black and gold blinders on and think that every little thing is gonna be alright.  The Bruins are broken, plain and simple.  They are not a tweak away from turning into a team that could be a force to be reckoned with in the playoffs, they are a sledgehammer away from breaking down some walls and rebuilding on the fly, so they will have the chance to again be the contender they were thought to be in September, before the season started.

Perhaps the scariest thing for Bruins fans is the fact that their team has no identity.  In fact, one could easily argue, the front office led by general manager Peter Chiarelli, has no clue what kind of club he wants his team to be.  Small and large mistakes have taken the teeth out of a team that was once feared across the league – mistakes like dealing Johnny Boychuk before the season started and letting Shawn Thornton walk in free agency, instead of signing him to a team friendly deal like Thornton was willing to do – and has rendered the once beast of the east that was a bear to play against, and turned it into a harmless cub, able to be caged by seemingly lesser opponents on a nightly basis.

Those mistakes are not limited to players who are no longer with the team for various reasons, in fact, some of them are still with the team, drawing paychecks much larger than they deserve.  Contracts like the once recently given to so-called 20 goal scorer Reilly Smith, who signed a 2 year extension earlier this month for $6.8 million, further hamstringing the team and deepening their salary cap concerns going forward, are precisely the reason the Bruins are where they are today.

By extending the would be restricted free agent, who hardly has a track record of success in the league – and quite likely could be sent to the press box if/when David Krejci returns to the lineup this weekend – Chiarelli once again has proven himself too quick on the draw to sign his own players, while he fumbles to find the trigger when it comes to making trades.

Despite his inability to make the moves he promised at the trade deadline last year, the beginning of free agency last summer, and when he dealt Boychuk prematurely this fall for only two second round draft picks, team president Cam Neely and the Jacobs family still were willing to let Chiarelli make the call on Smith’s contract, one that could be viewed as an albatross in the not so distant future.

It is obvious that the Bruins need change, both in the direction they are going as a franchise and in the locker room that seems to have tuned out their coach.  And while there will be some that will criticize the coach for his players turning a deaf ear to what he has to say, it is pretty tough to make chicken salad out of chicken bleep on a nightly basis, especially when the chickens don’t give a crap.

The only way, it seems, for real change to occur both on and off the ice for the Bruins is for them to hit rock bottom, and that means missing the playoffs.  By doing so, ownership and upper management would be forced to re-access where they are and how they got there.

They still have a core worth building around in an admittedly aging Zdeno Chara, the omnipresent Patrice Bergeron, a proven playoff performer in David Krejci, and an all-world goaltender in Tuukka Rask.  Sprinkle in some youth in the likes of Dougie Hamilton, David Pastrnak, Ryan Spooner, and Torey Krug, and you have the makings of something special.  Provided the GM can create the salary cap space needed to add the role players necessary this summer – combined with improvement in their performance on draft day, which has been borderline atrocious prior to last year under new director of amateur scouting, Keith Gretzky  – and they can begin to bring the team back from the abyss they are currently in.

The Bruins are mired in mediocrity right now, and it’s because they have overpaid for the Dennis Seidenberg’s, Milan Lucic’s, Brad Marchand’s, Chris Kelly’s, Gregory Campbell’s, Loui Eriksson’s, and now Reilly Smith’s on their roster.  Other than perhaps Marchand, the aforementioned players have underperformed this season, some – like Lucic – have done so at an extremely low level for long stretches of the year.

Headed into the summer before he enters his free agent season, a decision must be made on Lucic.  Ask yourself this question, do you really want a guy with a track record of overpaying his own players at an exceedingly high level, to be the one to make the call on a contract that could impact your team for the next 4, 5, or 6 seasons?

Despite the glimmer of hope that some saw at the start of the month of March the team had, it is obvious that at best the Bruins could possibly win a round in the playoffs before they are bounced.  Other than the core players listed above, everybody should be looked at as a trade chip this off-season in order to gain flexibility under the cap, and freshen the scent in the locker room.  The status quo has become stale.

The Bruins organization needs a wake up call.  The best one, in my opinion, would come from them failing to qualify for the playoffs this season.