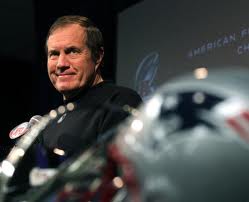 Patriots Nation, I apologize.  I was wrong, dead wrong.

Given the first opportunity this year to settle in and watch the early set of games without the home team in the fight for this season, I have got to say that I have come to the quick conclusion that no one in this league should scare anyone, anywhere.

Somewhere, someplace the late, great Pete Rozelle is jubilant.  Parity is currently king, and much like reality, parity sucks.

In today’s NFL early action the reigning Super Bowl champion Seattle Seahawks fell to 3-3 against the St. Louis Rams…the freaking St. Louis Rams.  The once proud New Orleans Saints are channeling the ghosts from their ghoulish past, and stumbling along at 2-4 while longing for the days when Bounty Gate was all the rage. Meanwhile their head coach Sean Peyton is desperately searching for the combination to the medication closet in the trainer’s room.

The Cincinnati Bengals who came into Foxboro a couple weeks ago undefeated, are now in the midst of a freefall that is a signature of their bench boss – who obviously has compromising pictures of the Brown family – Marvin Lewis.

The Pats opponent next week, the Chicago Bears, lost to the team that has been lacking a quarterback since Dan Marino was rolling doobies down in South Beach in the Ryan Tannehill led Miami Dolphins, by a lopsided score of 27-14.

I mean what kind of team that has any kind of championship aspirations does that, right?

Perhaps the biggest indication that the league is up for grabs and anyone that makes the playoffs may have an opportunity to steal the Lombardi Trophy come next February, is the fact that Tony Romo is currently leading the best team in football.

Tony Romo.  Let that sink in for a second.

To those of you Pats fanatics that have taken some of the criticism that I have leveled at the team you love so much to heart, I simply say I am sorry.  Who was I to ever assume that top tier talent mattered?  Exactly how could I be audacious enough to question the value system that called for moves like dismissing your best offensive lineman just before the season starts, or releasing a very valuable defensive lineman all in the name of saving a couple hundred grand when by not doing so could have separated you from the middling teams that dominate the league?

Really, what is the use of loading up against a league that has the likes of Daniel Snyder, Jerry Jones and Mark Davis calling the shots for their franchises?  It would be the equivalent of you taping defensive coach’s signals from the sidelines and using them for your future game plans.

So I admit, I was wrong and you were right.  I was silly and you were smart.  What fun would it be if you had superior talent and coaching?  I mean where is the gentlemanly competition in that?

I get it now, this is anyone’s league.  The game these days is over officiated, watered down and putrid with parity.  Even teams that are $10 million plus under the salary cap have a chance at a title.

I guess I just thought that Bob Kraft and Bill Belichick were smarter and more competitive than this.  Silly me.