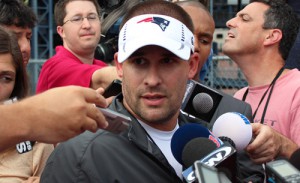 Q: What are your thoughts on the departure of Jimmy Garoppolo?

JM: Yeah, I mean, that’s the hardest part of our job is you spend a lot of time with a guy. All of us have a certain group of guys in our room that we spend more time with than others – and in Jimmy’s case, the better part of four years. So, you’re always sad. There’s a human element to this game that you can’t ever get away from. We understand the business side of it, but the human element is that you had a guy in your room that you really enjoyed being around, you coached, that spent a lot of time learning and grasping what you were doing, and you saw him grow and get better and mature and improve through the course of time, and now he’s not here. I wish him nothing but the best. I really, really think a lot of this guy. He’s got a bright future, he’s a great person and I hope he does well for himself out there.

Q: From the human side of it, is there a part of you that’s happy for the opportunity he has now?

JM: You always want things that are good opportunities for your guys. We understand that depth at a certain position is a blessing for us, but every player wants to play. I understand that, and that’s a good thing. They should want to play. They work hard to try to earn their opportunities, and when they get them, they’ve got to make the most of them. He had a few opportunities here and he did a good job with them, which is why he’s earned the opportunity that he’s had now. 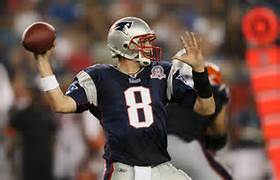 Q: You just signed Brian Hoyer, who you worked with in 2012. How fast can you get him up to speed?

JM: Brian’s a smart guy. He’s got, obviously, some years in our system and our terminology, so it will be kind of a cram session here, but I don’t expect that to take forever because Brian’s an intelligent guy that had plenty of exposure to what we do, and I know he’ll work hard. Hopefully we’ll catch him up really quickly.

Q: Does trading away somebody like Jimmy who was so familiar with the offense affect practice or meetings at all?

JM: Not really. I mean, we still have to have a good day of practice here. What we’re doing didn’t change based on one person or another. You know, you deal with a lot of that with injuries throughout the course of the season anyway. And, sometimes you have things that you want to do with certain people, but there might be people missing practice and you’ve got to do them with somebody else during the course of the week until you get to the game, and then you’ve got to count on the guys to really understand what to do and know how to do it. That’s what all the practices in the offseason and training camp are for to try to build a foundation so if that happens, we can handle it. But, it won’t change or adjust what we’re doing. Like I said, we’ll try to get Brian caught up as quickly as we can.

Q: What are your thoughts on Tom Brady‘s performance over the first half of the season?

JM: You know, Tommy has always been very consistent – works hard and is an amazing example of what happens when you take care of yourself and you put the time in and effort in to care about what you’re doing and try to play at a high level. So, we just spent a lot of time this morning talking to our group about a lot of things that we can do better and get better at, and so he’s kind of the leader of that group in terms of trying to take hold of what we can do better and move forward in the second half of the season and improve upon so that we can be a better offense.

Q: After the game on Sunday, Tom talked about the offense’s struggles in the red zone. How do you improve that?

JM: Yeah, it’s not one thing. It never is in our game, unfortunately. If it was one thing, it’d be easy to fix. It’s a lot of people understanding their job and doing their thing on each play the right way to its completion, and hopefully you string together a lot of those plays during the course of a series down there in the red zone. We’ve been down in the red zone a ton, and that’s a good thing. We’re going to continue to work hard at that, starting today in practice, and continue to focus on that. We have a strong belief that we can make something that hasn’t been necessarily a strength of ours into a strength in the second half of the season through a lot of hard work, and our guys are committed to it. We just had a great meeting with them. They’ve got a great attitude towards today and moving forward. That’s really all this is about is we’re never where we want to be at this point in the season during the bye week, and this gives us a small chance to take kind of a timeout, look at things that we’ve done in the first half of the season and try to make them better. That’s our responsibility as coaches, and now we’re going to work real hard with our guys to do that.

Q: Do you give Bill Belichick a hard time for not meeting with the media today and now here you are answering questions about the trade?

JM: I didn’t even know he didn’t meet with the media. Now I get it.

Q: Has the system changed enough since Hoyer was last here that he is no longer familiar with it?

JM: No, I think the foundation of our system is the same. There’s certainly things that have changed since he was here, I’m sure, but I would say that it’s just like learning a new language. Generally, they’re not going to change the language entirely. You know, you might have to learn a new word here or there or something like that, which I’m sure Brian will be able to do quickly. But, the foundation of our system and what we use and what we’ve done since he left has not really been that different.

Q: What do you remember from working with him in 2012 and what did you like about him?

JM: It was at the very end of ’11 and then, really, the beginning of ’12. He’s a really smart kid. He’s from Ohio, so I have a fondness for those guys. You know, he’s a football kid. He’s all about football and loves the game, cares about playing quarterback the right way, smart guy, works hard, good teammate, so there’s a lot to like. I spent a short amount of time with him. Looking forward to working with him here going forward in the second half of this season.

Q: Since we’re into November now, usually you guys know who you are at this point, but it feels different this year. Are you still trying to figure out the identity of this team?

JM: No, I think who you are is made up of who you have. We know who we have. We’ve got a lot of good guys that are good football players. We’re always changing based on the players that we have and the strengths that they possess, so we know kind of what those are. Now our goal is really to try to work to improve the areas of our offense that can make our team better and improve each player along the way. Nobody ever expected us to play our best football in September or October – not that we’re not trying hard to do that – but the goal is to be able to play really well towards the end of the year because that’s hopefully when we’re playing our best and we’ve got a group of guys that’s committed to doing that.

Q: How would you describe the identity of the offense this year?

JM: You know, it’s hard to say one thing is the identity. We try to be balanced and try to do a lot of things well, but right now I’d say we’ve just got to move forward and try to improve the things that we don’t do as well as we’d like to. Once we do those things better, I think we’re going to see a product on the field that we’re all happy with. It’s a good feeling to have things that you want to work on at this time of the year, you know, because it gives you some targets to try to hit. Whether it be penalties, cutting down on penalties, improving ourselves in the red zone, helping ourselves get better in our running game or some things in our passing game, there’s a lot of things to work on, and that’s a good thing for a coach. It’s a good thing for a team to focus on right now and try to improve and get better at. Read