Q: How would you describe Malcom Brown’s level of consistency this season?

MP: I would say for Malcom Brown I think where we’re at right now and what we’re trying to do with everybody is to improve every week and I think Malcom has done that. I think he has really trying to get better each week. Certainly we’re trying to work on staying consistent with our technique and being able to play the run game and the pass game better than what we’re doing. But Malcom is a guy that works really hard at his craft. He’s really trying to be consistent with the things that he does. He comes in and he studies. He’s been out there every day really trying to work to make sure that his technique is fundamentally sound, his pad level is low, that he’s using his hands in the proper placement, all that little finer points of detail that we’ve got to make sure that we can do play in and play out and every single snap. We try to get the most we can out of our – especially our padded practices, which unfortunately we don’t get a lot of those anymore. So having an opportunity to get out there in pads and to work on the technique that we’re doing is really valuable to us. I think Malcom is trying to do that the best he can as with all of our guys.

Q: Is Malcolm Butler’s competitiveness and willingness to play to the whistle something you’ve always noticed in him or is that something that has been coached up since he’s been here? 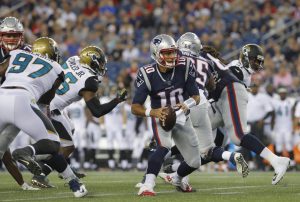 Q: What kind of challenge does the Falcons running game present with Devonta Freeman and Tevin Coleman?

MP: Yeah, great question and I would say that these guys on tape and their team as a whole with the offensive line, this run game is real explosive. Both of these guys are running extremely strong, big play after big play as is indicative of their average per carry. [Devonta] Freeman is an extremely quick guy. He does a great job of getting into space and taking advantage of defenders’ leverage. He’s explosive. He can really get the ball downhill fast. He’s got great feet, vision, balance, jump cut and one of the things where he’s improved his game is he’s got a great spin on contact and he breaks a lot of tackles with that spin. [They’ve] just really done a great job in the run game with him. Then [Tevin] Coleman is another guy who’s a very strong runner. He’s got excellent speed. He really does a great job of making the defense commit and then either try to cut it back behind the over pursuit or just be able to get to the edge and get outside and bounce it out there and beat everybody around the corner. So two guys that to me on tape that are running much better than they have in the past. [They’re] guys that have really improved the run game and their ability to control the game with the run. The thing that makes these guys so dangerous is now, obviously, their ability to get out into the passing game. They do a great job. Coach [Steve] Sarkisian does a great job of getting them into space, whether it’s from the backfield or motioning them out or putting them into empty formations now where they can get the ball in like a catch-and-run scenario or a screen or something where they get the ball fairly quick and they can just use their talent to be able to make people miss and run with the ball after they get it in their hands. There’s obviously a couple real dangerous plays on film where these guys go vertical in the passing game also and really try to take advantage of the matchups that they have their too. Two extremely talented backs, both in the run and the passing game. They’re doing a great job of just getting them the ball which just combined with obviously the rest of the talent that they have in their skill positions – the tight ends, the wide receivers, Julio Jones obviously is a big, big challenge for us.

Q: With the Falcons change at offensive coordinator from last year to this year, what are you noticing that stands out as different in terms of what they’re doing schematically, if anything at all?

MP: Well, again it’s hard to just straight compare let’s call it game 19 to where we are currently in the season. We’re just kind of going off of what they’re doing right now. Obviously, taking a look at what they did last year there is a lot of carryover to the offense and there’s a lot of skill players that are back, the quarterback. I think Coach [Steve] Sarkisian has done a great job implementing the system that was already in place plus adding his own variation to it and his style of offense too. I would say what they’re doing right now is just a great job of a balanced attack, both in the run and the passing game. The ball is coming out really quick then they’re also pushing the ball downfield with their shot plays which are very dangerous with the speed that they have at the skill positions [with] both of the backs like I mentioned and then also with their receiving corps. Julio Jones, he’s just an unbelievable, incredible player. This guy is an amazing wide receiver and a huge problem. [Mohamed] Sanu, when he’s been out there and we expect him to be out there, [is a] great player for them. That’s a guy that they depend on to really make the offense go and they do a lot of different things with him, whether they put him in the slot or outside or put him in the wildcat quarterback position. They’re going to do some different things with him there to kind of put you in bind. [Taylor] Gabriel, obviously his speed, his ability to make big plays. You saw [Marvin] Hall here against Miami with his speed and his ability to get vertical also along with the tight ends – [Austin] Hooper, very effective, very efficient player for them, great hands, the whole deal. They’ve done a great job of marrying up their run game, which is outstanding, with their play action game where they’ve been able to push the ball downfield along with their drop back game. Everything goes through [Matt] Ryan, that’s the quarterback, who’s an extremely smart player, gets the ball out fast, like I said deciphers the defense [and] the coverage very quickly. He can check at the line of scrimmage, change plays, get his offense into the best play possible versus the coverage you might have or the front you might have in the run game and really try to take advantage of all the different looks that he sees.