Matt Patricia keeps it simple “ I think every year you try to grow, you try to learn as a coach and I think you do that every day, every week.“

Q: It has been reported that a few teams have submitted requests to interview you this week. What are your expectations for this week and are you planning to interview with any of these teams? 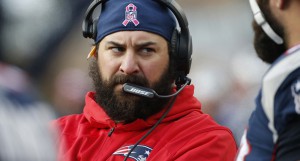 MP: Yeah, I mean I have no idea about any of that. None of that is even really applicable for me right now because I don’t have any information on that. I’m in normal mode – came in and graded the Jets. [I’m] trying to take a good look at what we did on defense yesterday and try so see where things that were positive and things that we’ve got to get better on and working to make sure that we have a good, productive week this week and try to improve those things.

Q: This is your sixth season as the official defensive coordinator in New England. In what area would you say that you’ve grown the most as a coach over the years here?

MP: That’s probably a really hard question. I think every year you try to grow, you try to learn as a coach and I think you do that every day, every week. You certainly deal with different players every year and those dynamics and those relationships are different. You learn how to deal with some different situations, a lot of things that come up maybe one year that didn’t come up the next, how to handle those or work within different parameters. Then certainly we’re always trying to learn and gain an advantage of knowledge in the scheme of everything, but just kind of the overall of how we do stuff. I mean I’ve been very, very lucky to be at such a great place for a long time and work for Coach [Bill] Belichick. [He’s] a great coach to follow and try to learn from and try to expand my knowledge. So we’re constantly trying to compete whether it’s just internally as a coach to be better, whether it’s out there on the field with an opponent. I think that’s kind of the drive that you have every day as a coach to try to make yourself better, to try to help your players be in a great position to perform on Sunday.

Q: What did you see from James Harrison and what gave you confidence that he would be able to fit right into your defensive scheme and work out so well yesterday?

MP: Yeah, I mean I would second exactly everything Coach [Bill] Belichick said. Certainly it wasn’t all perfect but from a guy who came in and really tried to, from the first minute he was in the door, learn and understand what we were doing on defense and how he could be implemented into that. The study and the questions were great going through and walking through and putting a lot of his own individual time in this week to get caught up to speed. It’s like anything. We get new guys in the building – when we get players that are new to our defense we try to put them in a situation we think they can fit the best and be able to try to be productive. So we tried to do that again last week and we’ll just see how it goes this week. I thought from his work ethic, I think Coach Belichick hit it right on the head. Everything he did to try to come in and really learn and put himself in a good position to go play yesterday was tremendous.

Q: What stood out to you in terms of the reasons for your success on third down yesterday?

MP: I think the guys did a really good job of executing the calls on the field. There were some different looks that we got obviously from the Jets. They had some different packages and things like that that they threw at us, but I would say we’ll always go back to the week of work. So let’s go back to Wednesday and Thursday during the week where we really started first talking about third down and really trying to make sure we improved our third down work compared to where we had been the previous couple weeks and get it back to what we had done the previous weeks before that. I think those guys accepted that challenge and really tried to rise up to it. I would say they did a good job with the communication and, again, recognition and then made a few adjustments in the game that I thought those guys did a great job of handling once we kind of saw what they were doing.