Look for different line combinations tonight for the Bruins

Bruins look to rebound from Monday’s matinee, but with a tad different lineup.

The Boston Bruins laid an egg on the ice and on the scoreboard in Monday’s matinee against the Colorado Avalanche. After the less-than-stellar performance, the team composition for Wednesday’s game may look quite different.

Despite outshooting their opponent 29-23 and getting four looks on the man advantage, the Boston Bruins were unable to capitalize against the Colorado Avalanche Monday suffering their first loss of the year.

For the third consecutive game, the Boston Bruins will be without their top center in Patrice Bergeron. Speaking following Tuesday’s practice, Bruins head coach Bruce Cassidy noted that Bergeron will not play in Wednesday’s matchup against the Colorado Avalanche, adding that both Bergeron and the team is “aiming for the weekend” in terms of a potential return.

In his two games this season, Bruins’ head coach Bruce Cassidy has appeared to be a big proponent of mid-game roster tinkering. If you were watching Monday’s game against the Avs, even a casual observer would likely have noticed at least 3 or 4 different line combinations and defensive pairings throughout the game. Unfortunately, even with all of that tinkering, they couldn’t even muster a goal in their loss Monday. 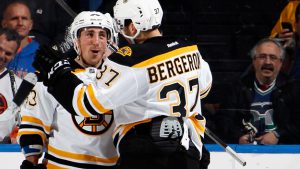 Bergeron, who did not skate during Tuesday’s practice, has been dealing with a lower-body injury for the past few weeks — missing both of Boston’s first two games of the 2017-18 season.

The Bruins did make some adjustments to their roster ahead of their three-game road trip against the Avalanche, Coyotes and Golden Knights. The Bruins also announced Tuesday morning that winger Danton Heinen has been called up from the Providence Bruins, while the team has also signed forward Ryan White to a PTO contract. Both skaters took part in Boston’s practice Tuesday at Warrior Ice Arena.

Basically, it doesn’t look ANYTHING like the lines we saw during the preseason or even during the first two games of the season. Riley Nash has been promoted to the first line, up from the fourth. Brad Marchand and David Pastrnak are a wing pair again alongside him. Jake DeBrusk and Anders Bjork, the two rookies in the youth movement, are being centered by David Krejci.

The team looked very flat in it’s performance on Monday. Considering the game on Wednesday is against the same team who pitched a shutout against them, I understand the tinkering.

However, I wonder whether the constant line-up changes and line tinkering could backfire, and lead to players not developing chemistry together. With all the rookies on the team, it may be time to let them go full speed and grow chemistry with the veterans even if it means costing the Bruins a game or two.

On Monday they were sloppy and disorganized, and at times lost. At the very least, a more high-energy performance would bode well for the team moving forward.