Logan Ryan anxious to get going “It’s going to be a lot of fun.”

Q: Are you as tired as we are?
LR: This is the earliest media I’ve probably ever had to do. Let’s knock it out. Let’s all get through it. 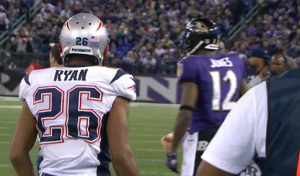 Logan Ryan is ready to take on Peyton Manning

Q: Do you figure to be matched up on either Demaryius Thomas or Emmanuel Sanders or could it be a combination of both at some point?
LR: Yeah, I’ll be on the field and they’ll be on the field so I’ll probably see one of them along with [Andre] Caldwell and other guys that they roll in there, [Cody] Latimer and that. So they’re all good players. They’ve got a good quarterback. He makes you even better. It’s going to be a lot of fun. As a competitor, as a corner, there’s no better matchup than playing some high-profile guys in a high-profile game. I think that’s what we all live for.

Q: Do you see opportunities to make plays against these receivers and maybe undercut some of their routes?
LR: Oh yeah, our primary responsibility is to get the ball on defense. That helps so many games that we win in turnovers, the turnover battle, games that we get interceptions we have a really high win percentage, so our goal always is to get the ball and then next is not let them catch it. If we’re in good enough position to play the ball then we’re taught to go get it. We’re always going to be aggressive in that end and try to go get those turnovers because it’s a risk but it’s a huge reward.

Q: How do you balance preparing for a specific receiver and studying his play while knowing that you might be switched to another receiver throughout the game?
LR: It depends on game plan. We’re going to watch a lot of film as a team. We probably watch more than anyone can imagine here – 12 hour days in the facility a lot of guys spend – and then going home I might watch my matchup or a little bit of something that I haven’t seen so a lot of time goes to film study because that’s just the best way to prepare for what’s going to happen, but at the end of the day games like this, they’re going to have plays for our weakness. They’re going to have plays game planned to try and beat us. They’re going to have plays that they like to run so you can’t really go out there and assume what they’re going to run. You’ve got to kind of play everything honest but you have a good idea with the more you watch.

Q: What do you think you did against Demaryius Thomas in the last matchup that allowed you to be so successful against him?
LR: I think he was playing with a new quarterback. I think there were some timing issues there, but that might not be the same this time, but I just felt like I competed with the guy and naturally I didn’t back down from any challenge. I kind of stepped up to the plate and took what I felt like was mine and went and played the ball, got my hands on the ball a lot, which I want to continue to do each and every week. That’s something that I’m developing and growing as a corner, just going out there good and bad, just trying to compete with these receivers and holding my own.

Q: Is there any kind of stat that Coach Belichick has emphasized this week regarding a certain emphasis that you guys might place on getting some turnovers?
LR: No particular stat but if we win the turnover battle, just being a football player, when you win the turnover battle it definitely gives your team a higher percentage of winning. I just think that’s a general football stat and then when you have a great offense and a great guy like Tom Brady – every time you can take a ball away and give him an extra possession – hopefully and usually he gets points out of it. Points equal wins in the playoffs and just in football in general.

Q: Is there any single reason why the team has struggled in Denver?
LR: I think they’re a good team. I think that’s why it’s just tough. We usually play them in big games. We usually play them in the playoffs. We’ve won our fair share. They’ve won their fair share so I think everything’s kind of even here. I think there’s enough motivation just in the game itself to want to do everything you can to win this one.