Larry’s lament, Lester says it would have been harder to leave Sox if he wasn’t dealt 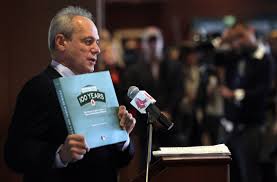 It’s the gaffe that keeps on giving.  The Red Sox front office – led by team president/CEO Larry “Lowball” Lucchino – emerged from the Jon Lester sweepstakes last week with so much egg on their collective faces that even Larry himself had to stand up and take at bullet publicly this past Saturday at the Christmas at Fenway event that the team holds annually before the holidays.

Lucchino said, “We’re disappointed, certainly have regrets here and there as to how it all went down, but right now I’m trying to focus on the future and want to express a sense of gratitude to Jon Lester for all he did for us, for the horse that he was for us so many years, a successful pitcher and person. I wish him luck. I’m glad it’s in the other league and not our league. That’s cold comfort, but some comfort.”

Unfortunately for him, things only got more uncomfortable when the Chicago Cubs introduced their new ace at a press conference in the windy city Monday afternoon.  When asked if his being traded to the Oakland Athletics at the trade deadline last season made it easier for him to accept the Cubs offer instead of returning to the Red Sox, Lester said, “I think so, we were traded. That was the unknown of going to a whole different coast, a whole different organization, a whole different philosophy. I think going there prepared us for this time. I think if we finished out the year in Boston and you get down to this decision, I think it would be a lot harder. Not to say it wasn’t hard as it was, but that broke that barrier of, ‘I wonder if I can play for another team.’ I think we answered those questions.”

Way to kill two birds with one stone there, Larry.  First the club pissed off the pitcher to the point that he decided not to negotiate any more with the club after receiving a 4 year, $70 million offer in the spring, then they made the road to free agency seem more appealing after they dealt him at the deadline, which essentially cut the heartstrings that seemingly held Lester to the only team he had ever known prior to being shipped to Oakland, and opened his eyes to the fact that the grass – not to mention the cash – can actually be greener somewhere other the Fenway Park.

It’s as if the Sox front office took a How To Screw It Up Royally 101 class starting in spring training and Lucchino was the nutty professor.

This is not going to play well over on Yawkey Way where perception is reality and the reality is Red Sox Nation will be in a rebellious state after hearing their former ace say he probably never would have left if the team didn’t push him out the door.  No amount of NESN commercials spinning ticket sales will make this go away in a hurry, that is unless the team makes a deal for a Cole Hamels or a Jordan Zimmermann to anchor the starting staff next season instead of a balky Clay Buchholz and a bunch of guys named Flotsam and Jetsam.

What started with Larry the lawyer opening negotiations with a ludicrously low offer and led to the team trading their ace mid-season thus opening the door for Lester to get a sense of what life after the Red Sox might just feel like, ended with Lester pulling the pin on a public relations nightmare grenade during his press conference in Chicago.

One only hopes that principle owner John Henry sees the mess Lucchino made of the Lester affair and keeps Larry away from anymore involvement in negotiations with players or baseball operations decisions.  Lester’s comments only confirm that Larry should stick to doing what he does best, selling books and bricks.