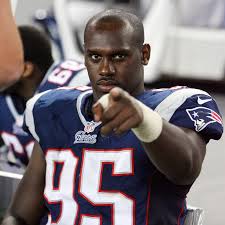 In sports at times it is often said that it’s better to be lucky than to be good.  Since lady luck seems to have turned a blind eye to the Patriots and the injury bug has bit for the second year in a row on the defensive side of the ball, it seems as if we will find out just how good Tom Brady and the offense can be just as the Pats head into the most difficult part of their schedule.

Now that Chandler Jones has joined Jerod Mayo on the sidelines – for a month or so at least – the holes on the defense are starting to accumulate quickly.  The limited ability they have shown to be able to pressure opposing quarterbacks will now be even more even further diminished, as their most effective pass rusher will be in street clothes perhaps beyond Thanksgiving.

For a team that was already walking a razor thin line regarding depth among their front 7 defenders this season, losing a player of Jones’ ability could turn the barely above middle of the pack ranked defense into bottom feeders yet again.

A quick look at the numbers shows that they have been nothing special against average to below average competition for the first 7 games of the season, all with a healthy Jones throughout and Mayo only missing the Jets game last week.  Headed into Sunday’s game against the Chicago Bears in Foxboro the Pats currently rank 12th in total defense, 17th in total points allowed with 154, 13th in average points per game with 22, and a staggering 25th in 3rd down conversions allowed at 46 percent.

With the level of competition increasing and depth defensively decreasing, these numbers are likely to worsen over the next several weeks.  That means once again Brady and his boys will be asked to carry more of the burden, which is a formula that has worked fine in the regular season, but has been a death knell come playoff time when the good team can apply pressure and take away his limited targets.

It is only conjecture of course, but I’m guessing if Tommy Kelly were available for the couple hundred thousand dollars that it would have cost him in order to have quality depth on the defensive line, Bill Belichick might just be a little more interested in taking out his checkbook now as opposed to when he cut him prior to the start of the season in order to balance an already bulging bottom line.

Instead they are left to look to sign another high quality individual in former Buffalo Bills defensive lineman Alan Branch, who got bounced from the Bills after a history of erratic behavior and getting busted for a DUI this summer.

Given the history of “character” guys that Belichick has brought in during his tenure – Corey Dillon, Willie Andrews, Donte Stallworth, Randy Moss, Adalius Thomas, Albert Haynesworth and Aaron Hernandez to name a few – one has to think that if Bill were in charge back in 1996, not only would Christian Peter have not been cut, he just may have been a defensive team captain.

Ah, the vaunted Patriot Way.  No sin is too great if you can play and come at a discounted rate.  You would think that after the whole Hernandez serial killer thing, Bob Kraft would think twice before saying “In Bill We Trust” when it comes to shady characters on his football team, but if they come at the right price maybe not, right?

So, as it has been the case for the better part of the past decade, the Pats fate will rest on the right arm of their 37 year old quarterback to carry them to the promise land.  Only this time the lack of depth that is currently handicapping the defense is prevalent on the offensive line, and while the offense has been definitely improving, they are just one injury away to the ever fragile Rob Gronkowski or the undersized Julien Edelman to being reduced to average at best.

What looked daunting just a week ago is now looking like a colossal chasm the Patriots need to cross in order to get to December in prime playoff position.  And while I wouldn’t put it past the dynamic duo of Brady and Belichick to somehow figure out how to come out of this next 6 game stretch against the Bears, Broncos, Colts, Lions, Packers and Chargers at 3-3, the high expectations that were shared by just about everyone regarding making a run for an illusive fourth Lombardi trophy next February when the team was entering camp this past July, is now looking like something that lady luck on her best day would be unable to provide.

Yet in this world of parity that exists in much of the NFL days, I suppose anything is possible.  Although when one compares what Peyton Manning and the Denver Broncos did to the San Francisco 49ers on Sunday night, opposed to the struggles the Patriots had with a healthy Chandler Jones against a really bad New York Jets last Thursday, it seems as if perceived parity will only get you so far.