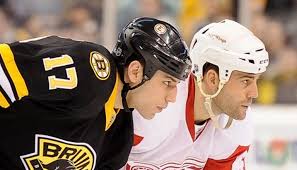 While last night’s 3-2 win against the Detroit Red Wings wasn’t pretty, it was effective, and suddenly the Bruins are tied for 3rd place in the division, while practically punching their ticket to the post season in the process.

However, the only thing uglier than the road win by the B’s – one in which they chose not to show up to play in until the 3rd period – was the inexplicable failure to respond when their 160-pound rookie David Pastrnak got rocked by Niklas Kronwall in the 2nd period, and linemate Milan Lucic’s decision to do nothing about it.

Sure, there were others who could/should have stepped up as well, but Lucic is the closest thing the Bruins have to an enforcer since Shawn Thornton left town last summer, and Johnny Boychuk was shipped to Long Island for a couple of second-round draft picks in early October. Not to mention, he was on the ice when the hit occurred.

And while the hit to Pastrnak was not nearly as devastating or predatory as the hit Matt Cooke laid on Marc Savard five years before that effectively ended his career, the lack of response that followed was eerily similar to the B’s lack of response last night. It begs the question, what role does Lucic play on the line with Spooner and Pastrnak if it is not to ensure they are not targeted by the opposition on a nightly basis?

In order to be successful in the playoffs – assuming Claude doesn’t revert back to his distrust of rookies and places either Spooner or Pastrnak in the press box for the sake of getting Gregory Campbell his eight minutes of ineffective ice time – the Bruins are going to need to make sure their skilled players are protected in the post-season. Letting hits like the one that leveled Pastrnak last night, without at least getting in the opponent’s face to voice your displeasure, will only lead to playoff opponents taking even more liberties with the talented rookies down the road.

Think about it, if teams know there is no price to be paid to targeting your best players, then target they will. It was thought all along that one of the reasons the head coach put Lucic on the line with Spooner and Pastrnak was that he would create room for them to work through his physical presence. Part of being a physical presence is stepping up for a teammate when needed.

Somewhere between telling Canadiens’ forward Dale Weiss, he was “going to bleeping kill him” in the handshake line after losing game 7 to Montreal at the Garden last spring, and reporting to training camp in September, Lucic lost his snarl. On a team that has had much of its bite removed via free agency and trades entering this season, the Bruins can’t afford for Lucic to be a passive bystander any longer when a situation like last night occurs again.

Given the fact that the aging Zdeno Chara is playing like a guy who is not right physically – the puck looked like a grenade coming off his stick last night at times – and Adam McQuaid’s extensive injury history, more has to be expected from Lucic when it comes to laying down the law on the ice for the Bruins. Add to that a large part of the reason the B’s have rebounded recently has been the play of Spooner and Pastrnak, so the sense of urgency when it comes to keeping them upright should be very high.

You would think that when you see your talented, yet tiny, teenage teammate prone on the ice as a result of a hit from an opponent who has made a name by delivering massive blows with his body, the “prototypical power forward” in you would at least return the favor. Instead, Lucic was content to skate to the bench to take a break before his next shift, unable or unwilling to come to the defense the 18 year old rookie.

Everyone knows that the Big, Bad Bruins – at least for now – are a thing of the past. After yet again watching Milan Lucic fail to come to the aid of a teammate, one has to wonder if the best he had to offer is in the past as well.