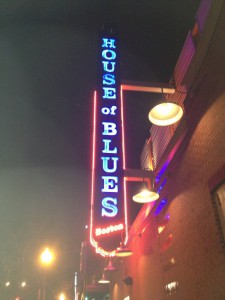 Once again the Boston music scene has outdone itself. On a Friday night before Halloween, one would expect a crazy night out, and that’s exactly what I got. Kip Moore put on an incredible performance and the crowd was going wild. I was waiting in anticipation outside the venue, surrounded by friendly people with awesome costumes for the spirit of the holiday.

Before I even got inside, there were food carts along the sidewalk for all those interested in grabbing a cheap bite before the concert. There’s also a restaurant that people can go to before the show that’s a part of the venue. This eating is a bit pricier, but for only one night out, it’s worth it!

For someone who has never been to House of Blues before (me), there are no words that can prepare you for the rush you get as soon as you walk through the doors. The venue is very large with three tiers of standing and sitting room. I really liked that on the main floor, there are a couple steps in the back of the room just so people can be a bit higher to see over the crowd in the front. There are bars for the 21+ crowd and an enormous, well lit stage that everyone tightly packed around.

The two opening acts were great. There is something about country music that just makes you want to move. First was Joey Hyde: just your run of the mill country singer that was perfectly content with just him and his guitar onstage. He got the crowd going, cracking a few jokes and interacting with the audience. I didn’t know his music well, but he was a great performer that sounded smooth and looked comfortable being onstage.

He set the stage well for Michael Ray, who came on and stole the show. His performance was electric and he even hopped down onto the floor level to be closer to his fans. He sang some well known songs and some songs I hadn’t heard before. A few songs that really got the crowd going were his cover of David Lee Murphy’s “Dust on the Bottle” and Ray’s own “Kiss You in the Morning.”

After Ray was done performing, the crowd was wild and ready for Kip Moore, however, in between each act, speakers from a local radio station came on and spoke. This was a bit of a mood killer, but the show went on nonetheless because as soon as Kip stepped onstage, the audience erupted in an outburst of cheers, whistles, and screams. Kip’s power-driven presence onstage kept everyone on the edge of their feet the whole time. His upbeat rhythm and constant motion added to the whole performance. His popular songs, such as “Hey Pretty Girl,” “Something ‘bout a Truck,” and “Beer Money,” got the crowd singing along and swaying to the beat.

House of Blues is a really fun venue, but I would recommend for the 21+ crowd for country concerts. There’s just something about swaying to a song with a can of beer in your hand. And for those who haven’t been to a country concert, I highly recommend Kip Moore. He has a great sense of how to connect with an audience and he sounds great live. A really amazing venue and outstanding performers made for a really great Friday night. I can’t wait to go back to House of Blues, and as for Kip Moore…come to Boston more often!