Bruins coach Claude Julien was not a happy guy following his teams fourth consecutive home loss Wednesday night. The Bruins have now collected just 1-point out of a possible 8-points from their 4-home games.

Bruins fans saw what Julien was witnessing. And it wasn’t good. The evening could be summed up with the words lackadaisical and unemotional play.

To make matters worse, it wasn’t just a few players, it was the majority.

Rask may be the biggest villain in Julien’s locker room right now. Rask appears to have checked out mentally already, just six games into the season. The public pouting should start at any moment. Rask can’t be happy with the defensive pairings (or lack there of) in front of him but he’s being paid as a top goalie in the league and to the best of my knowledge, he’s still cashing Jeremy Jacobs’ checks every other week. In the pecking order of highest paid net-minders, Rask and his $7M salary only trails Henrik Lundqvist ($8M) and Sergei Bobrovski ($7.425M). If you’re going to collect a hefty pay check, you could at least appear to care for 60-minutes a night.

Julien held little back in his post game comments when it came to the play of his team and Rask in particular. The B’s coach got right to the point and dumbed it down as low as it could get when asked about the play of his goaltender and team in general. 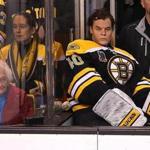 “I just think Tuukka has to stop the puck,” said Julien. “There’s nothing that’s different, and there may be mistakes, but that’s why you have a goaltender, to stop those. And I don’t think he’s making excuses either, he’s pretty good about owning up to his play”.

It’s one thing to own up to your bad play it’s another to give a rats’ ass and correct the problem.

Rask looks disinterested at best and a shell of the Vezina winning goaltender that he was. In interviewing him numerous times the past three seasons, I had formulated an opinion that his caviller attitude was more about a laid back life-style than anything else. But his performance to start the season and the way in which he closed out last season has given me a new perspective and understanding. What I’m now seeing is an uninspired and lazy goaltender who appears have his head everywhere but where it needs to be.

Let’s face it. If the Bruins have any chance to make the playoffs this season, Rask has to be able to keep his team in games and perform like the NHL’s 3rd highest paid goalie. His play to date falls far short. An elite goalie doesn’t allow a Flyer’s team to come back from a 2-goal deficit on the road in the third period. Unacceptable !

I don’t care how many young defenseman you have in front of you. The goals that Rask has been allowing are more of a reflection of his own play and not the fault of those in front of him. Vezina winning goaltenders cover up for the mistakes made in front of them

Along with an attitude adjustment, Rask can start improving his own performance by staying in the net. If I’m Julien, I’m chaining Rask to the crossbar. I’d be hard pressed to think of another goalie in recent memory that gives the puck away as often as Rask does when he ventures out behind the net.

The Bruins have little room for error with the team that GM Don Sweeney is rolling out on the ice on a nightly basis. Without Rask playing like he’s capable of, B’s fans can kiss a playoff berth good bye again this year.

For Rask, the talent is there physically, but is the desire to be an elite goaltender strong enough to overcome some nasty traits and bad habits ? Bruins fans should know around Thanksgiving on which direction their goalie and team are headed.