You don’t need to be a hockey genious to know that Bruins coach Claude Ju!ien played a rather large part in the Bruins demise Wednesday night in Washington.

Dont get me wrong. Julien wasn’t the only reason for the shut out last night, but his moves have left fans scratching their heads. 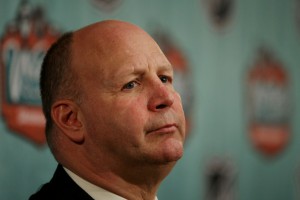 wrote last week that Claude needed to be careful tinkering with lines this late in the season after the team goes on a 5-game win streak.And lastlast night it came back to bite him in the ass.

The media has been talking for days about David Krejci not “feeling comfortable” playing the wing. So to placate Krejci, Julien breaks up the best line the Bruns have seen all season long (Ryan Spooner, David Pastrnak, Mi!an Lucic) and the results were horrendous.

When Gregory Campbell gets the fourth most time on ice
last night……you’ve got major problems.

Pastrnak skating on the fourth line is a joke ! The kid can create. Yes he can make mistakes. But Claude doesn’t have the luxury of NOT playing him.

The following is the story that we ran last week