Julien has earned the right to be shown the door immediately 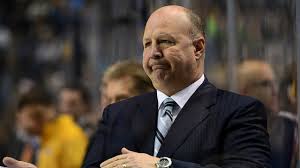 Whether you spend your spare time petitioning the NHL to give extra points to teams that tie games 0-0, or you were among the multitude who were sitting with their motors running on Causeway Street at the 10-minute mark of the 3rd period of game 7 against the Toronto Maple Leafs in 2013, getting ready to take the head coach to the airport after the game, we should all be able to agree on this. Claude Julien owes the Boston Bruins organization nothing.

During his eight year run with the Bruins; Julien first took a team that was undisciplined and ragged, and turned them first into a playoff team, and then into a champion. He won a Stanley Cup in 2011, and two years later took them to within a little over a minute away from playing in a game 7 for another one. His celebrated system is what helped build the team into an annual contender for a half a decade, and it is also the reason he will be sent packing sooner rather than later by whomever Cam Neely names as his next general manager.

So why wait? Leaving the classy coach hanging is, in a word, classless. The fact that the team is on the hook for an extension that was signed last November – an extension that seemingly was rubber-stamped by Neely or team CEO Charlie Jacobs before it was issued – should be irrelevant. Julien did his job while he was here, and he did it well. For crying out loud, he spent at least a part of his 55th birthday this week at his office, no doubt drawing up schemes to get Chris Kelly more ice time.

The right thing for Neely to do at the present time is to stop the game of charades and let the man move on. In fact, one could argue, it is in the team’s best interest to cut ties with Julien now while there are several job openings, so they will be off the hook for most, if not all, of the money they now owe to him. Who knows, if the rumors are true and Peter Chiarelli lands on his feet as the head of hockey operations in Edmonton for the Oilers, he might just scoop up his formerly joined at the hip head coach before anyone else can.

Ok, maybe not, but admit it, it is fun to think about the mushroom cloud that would be Claude’s head if he was faced with a team that couldn’t spell back-check if you spotted it the back and the check.

No matter how you slice it, it is not good business for the Bruins to have their soon to be former head coach dangling in the wind. Sure you can leave the dirty work to Don Sweeney if you would like (Does anyone really think the B’s “exhaustive” search is going to lead anywhere but back to him?), but that is patently unfair to both the new GM and the soon to be departed head coach.

Julien’s work ethic and dedication has been beyond reproach in his time with the Bruins. Disagree with his tactics, his strategies, and his vaunted system – we know Neely does; reports are he wanted to fire the coach during the season but was rebuffed by Chiarelli in his efforts to do so – but Julien has been nothing but a standup guy in his tenure with the team.

Neely pretending that there is a chance the new general manager will retain the coach is just a piece of bad acting on his part, all that is missing is the truckers’ hat and Sea Bass nickname. The Bruins president should put a stop to delaying the inevitable and release Julien to the open market.

Love him or hate him, you still have to respect the job Julien did in Boston. He deserves better than being told he can quit – and not get paid – if he wants, but the team will fire him when they feel like it. It is not his fault that the former GM gave out contract extensions like they were Thin Mints at Halloween, and he should not be punished for simply signing on the dotted line.

It is time for Neely to do the right thing and fire Julien immediately.