JULIEN HAPPY WITH EFFORT, BUT FUSTRATED….

Boston Bruins coach Claude Julien is getting fustrated. Can’t say I blame him. But at the end of the day, he’s responsible for the out-come of the game. I know…he’s not skating every third shift. But he is in charge of motivating, tinkering and match ups that so far have failed. Claude, you’re the coach, answer tough questions when they’re asked and stop protecting your players ! 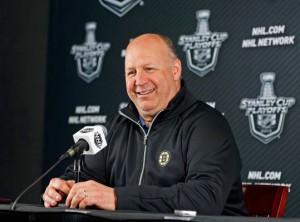 In his post-game press conference following a 3-2 overtime loss @The Garden Saturday afternoon, Julien said he understood that reporters were as frustrated as he was. All well and good except when you give an abrupt response to the media when a question is asked about a players performance ESPN’s Joe McDonald drew the wrath of Julien on Saturday.

“Were you watching the game? [McDonald:Yes] Yeah, I think there’s more than Looch [Milan Lucic], but uh Looch and I thought [Brad] Marchand wasn’t playing well either so kind of switched them around to see if they could get a little bit more going in that third period. [McDonald:Do you think that went well?] It doesn’t matter. Next.

McDonald’s question was right on topic.I think most Bruins fans want to know how to get Lucic back on his game, but Julien wasn’t having any of it.

Julien promised to be careful with his words in his opening statement wirh reporters citing the teams effort and hard work. But that only lasts so long and Julien is sadly mistaken if he thinks Bruins Nation is not going to want answers to the type of question McDonald asked.

BOSTON BRUINS HEAD COACH CLAUDE JULIEN POSTGAME
On whether it was too difficult to make a comeback tonight…so
I thought overall our effort tonight was good. It was good enough that we could’ve won a game. We’re not winning those and it’s frustrating for everybody including you guys so I know we can nitpick and every little detail of our game, but you know we’ve played tast two games well enough to win. They’re not perfect, but there good enough to win and I think that’s where I’m going to be careful with how I talk about this thing with you guys and with the team, because you know we’re working hard we still have some areas we got to get better at we still forced some plays that ends up giving us some issues, but you know overall I thought the effort was good. Was our net front presence perfect tonight? No, I think that’s what we kind of are looking for in order to turn the corner. We need a little bit more of everything, but overall, like I said, we killed two 5-on-3’s, we scored on the power play, we had some chances, but at the end of the night though it’s just not enough and you know you take a 2-1 lead and they scored a goal that’s going 2 feet wide so… you know how much do we want to jump on our players? I think we got to focus on tomorrow and then take our loss here and move forward and go win ourselves a game tomorrow.

On if they played well with the lead in the third period…
Yeah, I think we scored a 2-1 goal and they had the 5-on-3 I don’t think there was any issues. They scored a good goal and a lucky bounce and that’s all it was. There was no issue with that. Guys, you know again, when you’re not winning everybody’s looking for the perfect game and every little thing is being criticized here and I’m looking at our team’s effort overall and our team’s effort overall in the last two games should’ve been good enough to win a hockey game. We didn’t do it so we got to find a way to win.

On the improvement in their special teams…
Well I think so I think it’s pretty obvious, right? When your power play’s scoring, the number of power plays we get and at the same time we’ve got some big kills where this night could’ve been a lot worse if our penalty killers hadn’t done the job they did.

On Adam McQuaid today…
Good start – I thought he moved the puck well. For a guy who didn’t play in a long time, I thought he was pretty poised with the puck and played a pretty solid game.

On if he is in a phase where he is waiting for certain players to get hot…
Well you know if you get hot and certain guys get hot, you get more than two goals tonight there’s no doubt you always wish you could have that throughout the whole season, but like right now the effort is there. You’re going to say well maybe it’s not perfect every team has the same issues except when you win a game you pack your bags, and you leave you’re happy. When you don’t then, you know, you kind of critique every little area of your game. So right now, as I mentioned for a third time, the effort of the team is there overall throughout our whole game good enough to win hockey games, little things right now are what we need to do a little bit better in order to turn those overtime losses into victories.