Josh McDaniels – “We didn’t score enough points, didn’t produce enough first downs, didn’t control the game at all and we weren’t playing as well as any of us would like at that point in the day. “

Q: What was your message to the offensive unit when James White got stopped on that third-and-five in the second quarter Sunday? Obviously you were pretty upset on the sideline. 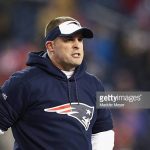 JM: Yeah, hey look, that’s my responsibility. Our overall performance, I feel like that’s what my job is and so I didn’t do a good enough job obviously on Sunday. We didn’t score enough points, didn’t produce enough first downs, didn’t control the game at all and we weren’t playing as well as any of us would like at that point in the day. I think part of coaching is understanding there’s times where you do things quietly and pull somebody aside, and there’s other times where you either just want to try to create a spark or what have you and just refocus on the things that are really important, and that’s really all I was doing. But, I don’t do that a lot, I don’t want to do that a lot and our guys are great about making sure that nobody needs to do that a lot. Just a one-time situation I think that you want to try to refocus on the things that are important and try to see if we can go out there and play a little better.

Q: Are you more inclined to do that if you have more new players on offense or is it independent of that?

JM: Yeah, I would say I don’t plan anything like that. I don’t think any coach really does relative to if new players, old players, experienced players, young players, first-time – as I said, I don’t do that much and I don’t plan on doing it much and that really isn’t something that I would even consider or think about in that regard.

Q: In the scheme of planning an offense, how necessary and important is it to have a perimeter threat?

JM: I think it – you want to be as difficult to defend as you possibly can be. So the more things that the defense has to defend, the more you can keep them off-balance, the more that they may struggle to try to spend a lot of time and effort taking away something else. So, to me, it’s like having a solid running game and being able to throw play-action passes. If you don’t run the ball well enough, it’s hard to make the defense come up there and honor the play-actions. If you have good perimeter players and you don’t have great interior guys, then they may play more split-safety and roll up on your guys out there and tend to double-cover those guys, and then you’re forced to put the ball somewhere else. You know, the better off you are at each spot or the better off that you do things offensively in terms of complementing things that you do, the more difficult you can make it on the defense and the harder you are to defend. We’re always trying to do that in any way, shape or form that we can. We want to try to be complementary with our scheme, we want to be able to run the ball inside and outside, throw it inside and outside, throw it horizontally, vertically and as much as we can do that to try to avoid becoming predictable, that’s what we’d like to do.

Q: How would you rate Josh Gordon as a perimeter player

JM: That’s – it’s hard for me to say that. I know there’s been a lot of conversation about that, I know what Coach [Bill Belichick] said and he referenced that whole thing. So I’d have to – it’s been a while, so we’ll have to see if that develops that way and how it comes along here as we go forward.

Q: What’s it like preparing to go up against Matt Patricia and his defense with your offense considering all the years he worked here as a defensive coordinator?

JM: Two things strike me right off the top. One, neither one of us will be in a helmet and pads on Sunday night, thank God. And, the outcome of these games will always be determined by who plays best and whose guys go out there and execute, run, block, tackle, throw and catch, cover, defend and all those things. Those are the things that are going to determine the outcome. It won’t be myself and Matt out there doing anything. But, it is a fun challenge. Matt’s been a great friend of mine for a long time. He’s extremely talented as a coach, he’s a great person and he’s – I’m excited for him to have this opportunity to be the head coach of the Lions. I think right now we’re probably all in the same boat in the National Football League and that’s in the situation of trying to improve our football teams and trying to improve our side of the ball so that we can get better from Week 1 to Week 2, Week 2 to Week 3 and continue our improvement throughout the course of the season. He’s always been very difficult to coach against when he was here. He does a lot of different things that challenge you schematically. He’ll keep you off balance. There’s definitely an element of spinning the wheel with Matt that you’re really going to have to do a great job of being alert and aware and doing a great job of communicating during the course of the game, and there’s no question that you’re going to have to make some adjustments. So there’s some things as you just mentioned – you know, we’ve all had a lot of time to talk and discuss things, and as you go into a game like this, you’ve seen the things you’ve seen. And, at the same time, you’re aware of things that – you know, there’s some things you may not have seen from them yet in the six games that we’ve been able to watch in the preseason and the regular season that you know you’re going to get something different. We’re going to try to make sure we know what we’re doing. We know it’s going to be a big challenge there. It’s a hard place to play, in the dome, on a Sunday night. We know there will be a lot of energy there, and Matt will make it challenging every step of the way. So, excited to have the opportunity to compete against him and his team. They’ve got a good group, they’re playing – they’re going to play better and better every single week, which is what they’ve been doing, and it’ll be a big challenge for us on Sunday night.

Q: You have acquired players mid-season before. How much time can you allot to a new player to try to bring him up to speed, and what kind of resources do you rely on to help that new player?

JM: Yeah, obviously there’s a lot of – you know, during the course of the season, there’s a lot of different transactions that happen and we get, you know – we may end up getting a different player or players every week possibly depending on our injury situation, practice squad, those kind of things. So, it’s just something you have to balance as a staff, whether it be the staff in general or the individual position coach. You take the time that you have, that you’re allowed with these guys and spend the time that’s necessary to try to get him up to speed. It’s impossible to simulate and replicate the Phase One, Phase Two, Phase Three, training camp – you can’t do all that in one week. So, if you get a player in the middle of the year, you try to acclimate him as best you can to the foundation of your system and then also at the same time, if it’s a game plan situation for a specific opponent. You do the best you can and every player’s different, every situation is different. Some guys might have the ability to play a larger role, some guys might not. It’s just all based on the individual person and the situation that you’re dealing with that week. But it’s something that’s not foreign. We’re very used to doing that on a weekly basis. We have a process in place that we try to use to help anybody that’s new get caught up as best we can and acclimated to our group.Josh McDaniels