JOSH McDANIELS ON THE SEATTLE DEFENSE..”This is as good of a group as we’ve played all year in a lot of areas.”

(on quarterback Tom Brady’s relationship with quarterback Jimmy Garoppolo)
“Big brother. Jimmy came in and really didn’t have-like most rookies-no background and understanding of how the NFL works. Here’s a guy (Brady) that is when you look at it, he’s competing with him. Tom and Jimmy are competing together for the same role on our team. Jimmy’s had a great attitude and tried to digest as much information as he can, and Tom’s been incredibly available for Jimmy. To watch a guy in his 15th year prepare to be the best player he could be-but also care enough about a young player to try and help him improve every day-it’s really an unselfish thing to watch happen. Jimmy’s a sponge, and Tom’s not afraid to tell him as much as he can. The one thing Tom knows is that if something happens to Tom, he needs Jimmy to be ready. There’s no selfishness at all on that front. I mean, he knows that if something were to happen to him he wants our team to still have a chance to win. So, if he can help Jimmy prepare each week or during the course of the season to be a better player if and when that would occur, that’s what Tom’s goal has been.”

(on what he saw in Garoppolo to draft him)
“I think Jimmy’s a smart player. He’s got a quick release. He’s been accurate. He’s won a lot of games and played a lot of football. He demonstrated some of the traits that we like to see in a quarterback coming out of college and at the same time, most importantly, what he demonstrated was the ability to learn. We spent a lot of time with him and he learned and pick things up pretty quickly. We knew that no matter what you get as a rookie quarterback, you’re going to have to develop the player anyway. So, that we needed really to see from him is… Yeah, he has talents and he has abilities, but we felt pretty confident about his ability to pick things up and try to progress and improve, because over the first year or two as a rookie quarterback in the NFL you’re going to have to make a lot of strides. We needed to see some evidence of that and he provided it.” 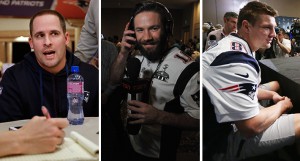 (on going for touchdowns rather than settling for field goals in the red zone)
“Yeah, (Head Coach) Bill (Belichick) would make that call. I mean, our goal every single time we go out on the field Sunday will be to score touchdowns. So, we don’t have any other motive in mind or any other motivation offensively. We’re going to go out there, and we’re going to try to drive it down the field get first downs and ultimately score touchdowns. Hopefully we don’t put ourselves in that situation. We’re certainly going to try and get it in as quickly as we can if we get down there. If we get into a situation like that, then Bill will make that call. We will be ready to go for it. All offensive players and coaches want to go for it on fourth down. We’ll have a plan and be ready. Bill will make those calls, but we’ll try to make his life a little easier by scoring on first, second or third down.”

(on Seattle’s defensive success in the red zone)
“This is as good of a group as we’ve played all year in a lot of areas. They’re no different on the goal line or in the red zone or on third down. They’re going to make life hard. We’re going to have to execute from the first play of the game until the last one. We know we’re in for a long day in terms of being patient. It’s not going to come easy. They’re not going to provide any easy yards for us. We’re going to have to have a strong will and a strong mindset, be mentally tough enough to continue to grind it out. When we get down there close again, that yard will be as hard as or harder than all of the rest of them that it took us to get down there. So, we’re going to have a great mindset and be prepared. Then when we make our calls, we’re going to need to execute them.”