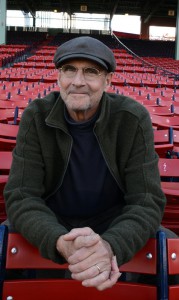 ( Boston, MA, 10/24/13) James Taylor at Fenway Park, after rehearsing the national anthem prior to singing it at game 2 of the World Series against the St. Louis Cardinals. ( Thursday, October 24, 2013). Staff Photo by Arthur Pollock

– The Boston Red Sox and Live Nation are excited to announce that the legendary James Taylor and his Band will return to Fenway Park on August 3, 2016. The evening will also feature his special guest, Jackson Browne. Tickets go on sale Friday, November 20 at 10 a.m. via redsox.com. “We are thrilled to welcome James Taylor back to Fenway Park for his second concert in two years,” said Red Sox President Sam Kennedy. “From Stockbridge to Boston, reaching all the way up to the Angels of Fenway, I cannot think of anyone whose music resonates more with Bostonians and New Englanders. We look forward to his return in August.” “James Taylor’s performance at Fenway Park last summer has already reached the status of one of his best ever by his fans, and one of the most special concert events at the ballpark since the first shows in 2003,” said Live Nation New England promoter Dave Marsden.

“With another New England favorite Jackson Browne doing the honors of opening the show, we anticipate next summer’s encore to produce another unforgettable night!” For Taylor, who was born in Boston and now lives in the Berkshires of Western Massachusetts, the concert at Fenway Park is, once again, a homecoming. Inducted into both the Rock and Roll Hall of Fame and the Songwriters Hall of Fame, the world-renowned artist has sold more than 100 million albums since he was first signed by The Beatles to their Apple Records label, and he has earned 40 gold, platinum, or multi- platinum awards. His Greatest Hits album alone sold more than 10 million copies. For more than forty years, Taylor has been a musical compass for his fans, articulating moments of pain and joy, and letting his listeners know that they are not alone.

At Fenway Park, Taylor has been the selection of the Red Sox and Major League Baseball to perform the national anthem during the World Series in 2004, 2007, and 2013.

A portion of the proceeds from this event will go to Action for Boston Community Development. https://www.bostonabcd.org/