James Bay packs them in at the House of Blues

Boston welcomed James Bay with intensity as he put on his first sold out show!. More people came than I had anticipated and the line to get in stretched from the doors of the House of Blues all the way to the end of the street around the corner. 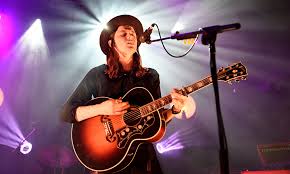 James Bay at the House of Blues

After arriving at my standing space for the evening on the balcony, I could get a good look at the audience down below. James Bay attracted all walks of life that night. They were there, young and old. There were parents there with young kids and groups of older friends just enjoying a night in the city.

The opening act was Frances, a UK performer with the sweetest personality. The lonely keyboard on stage left lots of guessing as to what was going to happen. However, when Frances came out and introduced herself, the crowd fell in love with her. She was laughing with the audience, showing us her quirky side and expressing her love for Fiji water.

She was charming and was even convinced to sing an impromptu cover of Hello by Adele even though she didn’t know all of the words! Her original music was also extremely good. I would love to see her lose herself in her music again and again.

After Frances left the stage, James Bay made quite the entrance with his popular song Collide.The entire audience was singing along and seemed to love the subtle dance moves he made around the mic with his guitar not leaving his side. I was impressed with his ability to swoon an entirely filled room with just a smile while not missing a beat.

I enjoyed when Bay stopped in between songs to chat with the audience.The interaction was honest. He did an exceptional job at making his performance personal with this particular audience. He continued his set with favorites such as When We Were on Fire, Let it Go, and finally closing with his most popular song at the moment, Hold Back the River. He even threw in a cover of Proud Mary by Tina Turner, which the crowd loved.

James Bay and Frances compliment each other well on tour and I believe that they are both amazing performers. While Frances is not as well known as James Bay, she appears to have great things ahead of her.

I have nothing but great admiration for each artist. Each one of them captivated the audience in different ways. These two UK stars will continue to do big things and produce amazing music.

I speak for everyone who was at the House of Blues that night when I say that we would welcome both James Bay and Frances back to Boston anytime!