Fantasy Football can be both the most fun a football fan can have, and the worst experience of a fans life, especially if you are the “Loser” of leagues that have punishments for the loser. Don’t worry though, I will give you all the tips you need to go from Jester to King of your Fantasy League.
With roughly 33 million people playing Fantasy Football each year, there are literally millions of different strategies and opinions on how to draft the perfect team.
I however have put together a list of the players to Draft, and the players to stay away from to give your team the best shot at finishing atop the standings.
So without further ado, here are the players to get and the players to stay away from.
Let’s start with the Quarterbacks shall we.

The QB that I would suggest staying away from this season would have to be Washington’s Kirk Cousins. Sure he finished 3rd in yards passing last season with 4,917 yards, 25 td and 12 int, but he lost some key weapons on offense with the departures of DeSean Jackson to Tampa Bay and Pierre Garcon to San Francisco. Jackson and Garcon were the Redskins two leading wideouts last year for Cousins totaling 2,046 yards and 7 td’s. Without those two and all of the off season issues with Kirk’s contract, I see his numbers drop just enough to make him a risky pick up for this season.
The best QB is more tricky due to the fact that there 4 guys that could easily be the top QB. Brees, Brady, Rodgers and Ryan. For me it’s a pretty simple decision, i’m going Brady all the way. Let’s think about it for a minute. Brady is the G.O.A.T. for a reason and I expect him to have an MVP caliber season this year. If Gonk stays healthy and Cooks has another 1,000 yd season, Brady is primed to put up massive Fantasy numbers.
Now let’s talk RB’s. 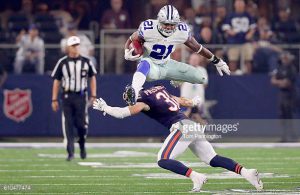 Ezekiel Elliott was hands down the most dominate running back in the NFL last season tallying 1,631 rush yds and 15 td’s, but with the possibility of Elliott missing the first 6 games this season, it’s just too risky of a pick for me. I might suggest taking him late 5th or 6th round, but I would not waste an earlier pick on him.
The best draft pick at RB is David Johnson (ARI). Everyone is going all in on Le’Veon Bell, but with Bell holding out on attending training camp, that makes me wonder about the mindset of the Steelers offense. Johnson had a very impressive season last year racking up 1,239 yds, and 16 td’s and I think that he will have a chance to rush for 1,500 yards this season. If you want to draft running back with your first pick, I strongly suggest David Johnson over Le’Veon Bell.
The wide receiver position is the easiest position to draft. Julio Jones, Antonio Brown, Brandon Cooks and for the Cowboy fans, Dez Bryant. All I can say about the wideouts is, trust your gut. I know that’s not the strategy that ESPN would tell you to use, but at the end of the day that’s all you have. No amount of research or studying can predict an injury or a a down season, so all you have to rely on is your gut.
So remember, If you want to finish as the King of your Fantasy League, pick the best overall player whether it’s quarterback or running back, and then go from there and I promise you will be just fine.