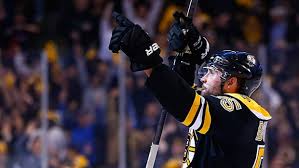 manager Peter Chiarelli was telling the hockey world that his team had 9 NHL level defensemen on his roster?  Remember when the biggest question facing his team entering training camp was who would step forward and claim the right wing spot on the B’s top line because he couldn’t find a way to fit their top goal scorer last season, Jarome Iginla, under the salary cap?

On a night that should have been a coming out party for a potential sniper in the making in the hot as a pistol Seth Griffith, the Bruins lack of depth on defense became the focus for a hockey team that is officially floundering at home.

Forget about the team’s salary cap woes for a second, how much do you think Chiarelli would pay for a Mulligan in order to take the deal that sent Johnny Boychuk to the Islanders back?  I’m willing to bet it is as much or more than he saved in cap dollars when he went full into full hoodie mode and sent his second most dependable D-man entering the season packing for a couple second round draft picks, especially now that the team is faced with seeing Zdeno Chara sidelined for at least a month with a knee injury that could have been much worse.

I’m just wondering if the Bruins GM ran the trade for Boychuk by Bill Belichick before or after he made the deal?

Try as they might to explain away why they essentially cut part of the heart out of their locker room while weakening what the core structure of their team is built upon – namely exceptional team defense – the Bruins did not have to trade Johnny Boychuk, they chose to trade him. They could have been compliant under the salary cap by keeping the brawny blueliner and everyone knows it.

The result of chasing the “value” that has kept the team in Foxboro from winning a title for going on a decade is now rearing its ugly head on Causeway St.  Forget about having 9 guys who can play defense at the NHL level, I bet head coach Claude Julien would settle for just 5 or 6.

To call the game the Bruins played on Tuesday night against the Minnesota Wild at the Garden sloppy in their own end is simply insulting to the word sloppy.  Matt Bartkowski continues to prove that he is not a reliable option on the B’s back end and his playing partner to start the night, Zach Trotman, was not much better.

When asked about the duo’s performance against the Wild, a disappointed Julien was diplomatic saying, “Couple goals against. Again, our whole team didn’t play well, so I’m certainly not going to start picking on them.”

As to Bartkowski being stapled to his seat in the 3rd period, the B’s bench boss again was kind when he said, “Well, yeah, I think we did with our forward lines as well.”

Lost in the 3rd period collapse is the emergence of Griffith on the team’s top line.  The rookie’s first goal was a thing of beauty as he drove to the net and redirected an absolutely perfect feed from David Krejci from the opposite wing to the back of the goal. 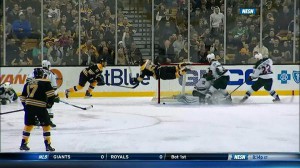 His second score was what you love to see from guys who have a knack for the net.  After Milan Lucic made a terrific play at center ice to send the play into the offensive zone during a line change, Gregory Campbell picked up the puck on the left wing and threw it to the front of the goal where a soon to be airborne Griffith got enough of his stick on the puck to put it past the Wild goalie Niklas Backstrom to give the Bruins the lead 2-1.

While Twitter was alight shortly after his superlative strike with comparisons to Bobby Orr and “The Goal” in their similar Superman stretch celebrations, the legend of “The Great Griffith” was stillborn as the B’s stumbled down the stretch.

The Bruins have played a league most 11 games so far this season and sit at a below .500 with a 5-6 record overall.  They are 2-4 at home in a place that used to be a house of horrors for their opponents.  Say what you will about injuries, slow starts, etc; it is hard to separate Peter Chiarelli sending Johnny Boychuk packing just before the season started and the melancholy that has seemed to set in with his hockey club.

The Bruins general manager once claimed he had 9 NHL level defensemen on his roster.  As more games like the one on Tuesday night against the Wild pile up, it seems he may have dealt away for nothing more than a couple of draft picks one of his most important assets.

Can someone please explain where the value is in that?