It is not just Boston that is betting on Betts 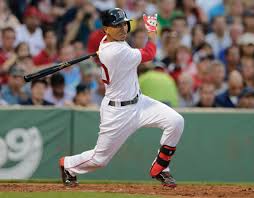 With opening day less than a week away, the talk surrounding the budding wunderkind that is the Red Sox projected first-year center fielder Mookie Betts has the baseball world abuzz. While his story may not be as striking as the newly demoted Chicago Cubs third baseman to be, Kris Bryant, Betts’ emergence this spring has been eye catching.

With his lights out performance at the plate and his obvious improvement in the outfield so far in Fort Myers, coupled with a rookie season that saw him make the switch from the infield to the outfield at the big-league level and the poise he showed while doing so, it is not just the folks in Boston, who are taking notice of Betts.

In just the last 24 hours, Fox Sports’ Ken Rosenthal and Yahoo Sports’ Jon Heyman have each penned pieces that have profusely sung the praises of the Sox potential next superstar to be. Rosenthal’s column, which ran on Monday, made comparisons of Betts to the Pirates’ Andrew McCutchen, the Sox own Hanley Ramirez, and the recently retired former Yankees’ captain Derek Jeter. Heyman’s post, which ran on Tuesday afternoon, piggybacks on the star-to-be theme found in Rosenthal’s piece, and gets the rubberstamp of approval from scouts he spoke with about the Sox next best thing.

Holy betting, Batman. It sounds as if it is not just Boston that is all in when it comes to Betts.

One needn’t tell longtime Red Sox fans that prospects can be a bit over-hyped in Boston. Dating back to the next tandem of aces in the Sox pipeline that was Carl Pavano and Brian Rose in the late ’90’s, up to Jackie Bradley Jr. and Will Middlebrooks just last season, the Red Sox have had a plethora of potential stars that have missed the mark most thought that they couldn’t fail to hit.

(Side note, yes I am aware that Carl Pavano was part of the package that brought Pedro Martinez to Boston so you can save yourself the corrective emails.  Thank you.)

However, anyone who knows anything about the game – in particular, those who are paid by other teams to assess potential talent, professional scouts – talk about how different Betts is from the rest of those who have failed to live up to their billing in the past. Other than the physical gifts that are so evident – the hand/eye coordination, the bat speed, the aptitude for the game – most talk about the poise and the presence that seemingly separate him from the rest.

Prior to spring training and through the first few weeks in Florida, trade rumors swirled around the Sox new center fielder. There were even some silly enough to advocate Betts being moved in a package to bring Cole Hamels to Boston from Philadelphia to fill the Red Sox needs at the top of their rotation. Wisely, general manager Ben Cherington rebuffed such talk, and when Hamels throws his first pitch of the season Citizens Bank Park in Philly on Monday afternoon, it will be Betts leading off for the team from Boston, atop a lineup that just might light up major league pitchers for close to 900 runs this season.

Baseball fans in Boston love their superstar ballplayers that can wield a bat and do so with panache. It is why to this day, the names Williams, Yaz, Rice, Mo, Manny, and Big Papi are so beloved. If you believe what the baseball world is saying about the Sox new center fielder, there may just be another name to add to that prestigious list.

His name is Mookie.