Is a black and gold Hayes in Bruins future? 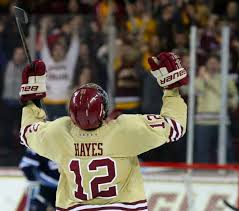 In what has been a summer of silence from the Bruins front office on Causeway Street, there just might be something brewing regarding adding a forward to the mix prior to camp opening at Ristuccia Arena later next month.

Earlier today CSNNE’s Joe Haggerty reported that the B’s are indeed in on newly declared rookie free agent forward Kevin Hayes.  The BC alum and Dorchester native did not sign with the Chicago Blackhawks because he wanted the opportunity to sign with a team that would give him a shot right away to play in the NHL.

I wonder if anyone has told him that his hometown team has a couple spots open on a team that should contend for the Stanley Cup next spring?

I am being facetious of course, but as Haggerty points out in his piece “the departure of a pair of right wings (Jarome Iginla, Shawn Thornton) has created a forward opening or two with the Black and Gold. The fact that Hayes will be working off an entry level deal is another boon to a Bruins team that has been bumped up against the salary cap ceiling all summer.”

There are some potential drawbacks to Hayes as a player however.  The big right wing never scored double digit goals at the college level – he had 4, 7 and 6 goals in his first 3 years at BC – before exploding for 27 his senior year and his toughness and consistency has been questioned at times as well.

Being deficient in either of those categories doesn’t actually endear one to head coach Claude Julien, just ask Phil Kessel and Tyler Seguin.

Haggerty goes on to say “there are some talent evaluators that feel like he’s more of a Blake Wheeler-type than the traditional, skilled power forward that the B’s are searching for. The size is ideal for Hayes, but he didn’t always play big and strong around the net considering his hands and ability to shoot the puck quickly.”

While those comparisons might draw a “been there, done that” type of response from some of the Bruins’ brass and especially from the coaching staff, the fact of the matter is the B’s are going to need to find scoring somewhere and right now the free agent rookie might just provide them with the best opportunity to find some on the cheap (and we all know Jeremy Jacobs loves a bargain).

Barring a deal entering or in camp, the Bruins as constructed are a stagnant bunch.  While their core of Zdeno Chara, Patrice Bergeron, David Krejci, Milan Lucic and Tuukka Rask are the envy of many teams, underperformers such as Brad Marchand, Loui Eriksson and Chris Kelly could weigh down the team when it matters most, in the playoffs.

The Bruins – as they have for several years now – lack a true goal scorer.  And while the 4 line system that Claude loves to employ can grind teams down in the regular season, their lack of finish sent them packing early against the Canadiens last spring and it cost them a Cup against the Blackhawks in 2013 when Nathan Horton pulled up lame.

It is often overlooked, but the Bruins in the postseason miss a player like Horton.  While he may have been frustrating to watch during the regular season and was prone to take time off during stretches of the months of January and February, the burly right wing delivered like no Bruin has since when the money was on the line in hockey’s second season.

While fans are frustrated with his scoreless streak in the postseason that now has reached 20 games, Brad Marchand has value and if the right deal can be had – Hello, Evander Kane? – the Bruins and general manager Peter Chiarelli would be wise to pursue it.

In the end the B’s might be best suited to add a new face to the room to complement their core.  If Joe Haggerty’s sources are correct, the Bruins might just have a fresh faced kid from Dorchester skating wing for them in a little over a month when the start the preseason against the Canadiens at the Bell Centre on September 23rd.

And who knows, the B’s GM might just have something cooking on the NHL’s version of the hot stove come training camp on the trade front.  Either way it will be nice to hear more than the sound of silence emanating from the barn on Causeway St. sometime soon.