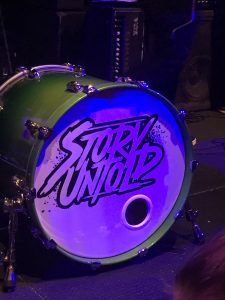 I had the pleasure of getting to see Story Untold rock the stage last night at ONCE Ballroom in Somerville in support of headlining band MAKEOUT, alongside Handguns, and a few of them were nice enough to chat with me a bit about embarrassing moments, awkward music video romance, and their thoughts about writing and performing music in general. Read on to see what I talked about with the French-Canadian rockers of Story Untold!

AS: I’m here with three-fifths of Story Untold, and these guys are the pop punk band to keep an eye out for! Some people say they’re stylized quite a bit like All Time Low, and I’m a huge fan of both – so let’s just talk about your musical influences. What made you want to start writing music, and what inspires you?

JT: I think it’s different for everyone, for me it was when I was about eleven, I wanted to be like Billie Joe from Green Day, so I just started to learn their songs and mimic everything they’d do. So for about two years, I was just a big Billie Joe wannabe (and yeah, I am still), and then eventually started listening to other bands like Blink, Sum 41, more metal stuff like Bullet For My Valentine, and all that stuff. That’s it for me.

JL: When I was like eight or nine years old, I was a big Simple Plan fan, and I always wanted to be a drummer, so I started playing drums while I was listening to their songs, and that’s why now I’m playing drums.

AV: I think it started out, I was really really young, both of my uncles played drums [and] none of my close family really do any music, except my sister sings, but I started playing drums when I was really young and then got into Simple Plan and was a huge fan for like years. And then just started playing a lot more drums and listening to a lot more things, and then I picked up a guitar and all that, it just went like that.

AS: So tell me about your songwriting process – what’s it like from first note on a page to a full song, and who writes the most songs?

AV: Actually it really depends, because we have a bunch of different techniques that we use. Sometimes Janick will come up with a melody, and the lyrics, and the chords, and we’ll just sing a little bit, and we’ll build that into a song. Or sometimes, we will write a song without any melodies or lyrics, and then write the lyrics after that and just sit down together.

JT: Yeah, I think it’s gonna be different for the second album. I mean, the first album was more me doing the biggest part in the song, but I think I want to change that and we want to have everyone involved in the process. I think it’s gonna make the songs even better and more “us”. Some other times, It’s just each of us chugs like six beers.

AS: [Laughs] I appreciate the honesty! That rocks!

AS: For sure! I think something about you guys that fans really identify with, is your honesty and your bravery, especially sharing things like [in the song] “Chasing Feelings”, for example. It’s a really powerful song and really personal to you, I know, so I really admire that and think that’s absolutely fantastic. 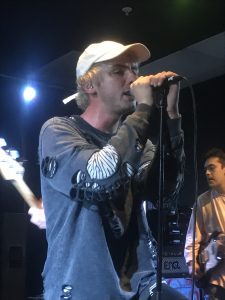 JT: Well, thank you. I don’t think there’s nothing to admire about it. I think the songs on the next album are gonna be more like this song, because I know that people can connect to songs like that and it feels better for me to write about things that happen in my life.

JT: Yeah. But I mean, I just love sad things and I don’t know if it’s a good thing, just love sad songs and stuff like that. So it’s good that people can connect with it, because I can connect [with] some songs from bands like Bring Me [The Horizon] and bands like that, so I want to do the same [for other people].

AS: Yeah, that’s awesome! And, what’s your most embarrassing moment on stage, just to lighten the mood a little bit? Something good?

JT: Oh, like when the jack from the microphone just fell down, and fell off. It happens quite a few times, like at least once every tour.

AV: I’m trying to remember, there’s been a few things here and there. Probably hit my bass on somebody and we stopped playing or some sh*t like that, or like –

AV: Or yeah, just stuff like that. Oh there was this one time in the beginning, I think it was Chicago, where I was talking to the crowd and then at some point, just stopped knowing how to speak English at all, it just stopped, I forgot.

AS: Oh yeah, I saw you Tweet something about that!

AV: Yes, exactly! It was like, ‘what am I doing’. But, I think it was just little stuff like that.

JL: Or when I’m supposed to hit the cymbals and my kick [drum] but I hit the toms.

JT: But I think the worst for me was that when we did a few shows with Simple Plan two years ago, I think, and I was like in the bathroom, peeing, and I didn’t have my in-ears in my ears, so it was just like alright, I’m just chilling and sh*t. But as soon as I put them on, I heard the song start, like our first song, so it was just like [expletive] and I was not on stage, so I missed like two lines in the first verse of the song. It was pretty bad.

AV: Yeah we all started as a band and I looked back and was like “where the hell is Janick?”

AV: And I looked at [another member] like “You’ve got to sing” and then he didn’t understand, and he looked at me and said “Janick’s actually just in back” and there he was.

JT: And then after that, we didn’t have tracks because I think there was some other [mess-ups].

JT: You know, things always happen, it’s part of it. It’s part of the game.

AS: For sure. And like for me, for example, I’m a guitarist and I’ve been studying for over a decade, but I can’t write music. And I actually write books, and actually gave you one of my books at Warped Tour, if you recall. And what do you suggest for songwriting, because I suck at it.

AV: You just make up something that makes you feel something, basically. Or choose something, and then try to put that into music. It’s weird to say it like that, but I think it’s what I do.

AS: Because I’m actually taking Music Theory [class] right now, and I’ve done theory over the years, but I’m too mechanical about it.

AS: Do you worry about that crap or nah?

AV: I personally don’t, but at the same time, Diego [rhythm guitarist] knows all that stuff, and he’s kind of another level with writing because he knows all the chords and everything, the names of every single thing. But it doesn’t really change anything, you don’t really need that to write a good song. I mean, I don’t think so.

JT: When it comes to lyrics, I think the songs I can connect to the most, don’t necessarily rhyme or do poetry, or it’s just like, when it feels true. But you know, sometimes it’s good when you have rhymes and stuff like that in songs, but I don’t think it’s necessary. If the message is getting out there, I think that’s the main point. It depends, it’s very subjective. Like for some people, it matters a lot, for some others, it doesn’t. So yeah, it’s up to you.

AV: Honestly, for myself, like not even in Story Untold or anything, I’ve just written a bunch of songs that first of all, I’ve never really released. 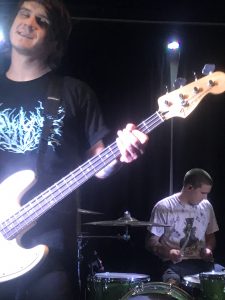 AV: But, I just wrote so much in the course of my life that there’s a couple things that I’m proud of, just not released yet. But if you talk about songs that are released, I think my favorite would be “Matches in the Ocean” and “Delete”, like songs that we’ve put out.

AS: I love the music video for “Delete”, it’s so aesthetically pleasing, I just love that whole thing.

AV: Yeah, they were good people. They did the “Drown in My Mind” video as well.

JT: I really liked the girl in the video.

AS: Oh, is she a girlfriend of yours?

JT: Yeah, which is why, they [the producers] were pretty [great about the awkwardness].

AS: So the girl in the music video for “All the Same”, is she just an actress or?

JT: There was like two different girls in the video, they were actresses. It was pretty awkward because at the time I had a girlfriend, so I had to, uh –

JT: Yeah but for me, my favorite song would be, musically, I think “Give Up on Us” was a big one for me. Even though it’s like, very simple, I just think it was good. But lyrically I would say “Chasing Feelings”, definitely.

AS: Yeah, I could so feel your passion and emotions in that, it’s really well done. And, Jonathan?

AV: I guess just, it’s cheesy but never give up, honestly just go for it. And if people tell you that you can’t do it, just do it anyway.

JT: Just like, immerse yourself. Live music, listen to music, just try to discover, be open-minded about everything. It’s cheesy but it’s true! Just take any advice that someone gives you, just take it, even though you don’t think you need it, you might need it in the future, so just listen to people.

JT: Don’t spend your money on booze and thrift stores.

AS: I really want to thank you guys for chatting with me. Merci Beaucoup!

To check out some of the music videos mentioned above, click the links below: