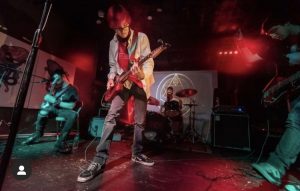 I recently got to sit down with the boys of the newly-minted Rhode Island pop punk band Never Coming Home, and we chatted all about their experiences with starting a band from the ground up while juggling other responsibilities like school and homework. They also mentioned their lofty ambitions for the future. That’s right, these talented guys are still in high school, but they have so much artistry and skill, they’re already surpassing many people older than them. Stay tuned for an insider look at their musical style – this band has so much potential, and their infectious bonds with each other may just be the glue that takes them all the way to the top. Fair warning though, there’s lots of teenage pop-punk related sarcasm and cliché’s ahead, so tread lightly. If it sounds like an inside joke, it probably is. But I’d say that just adds to their charm!

AES: I’m here with the boys of Never Coming Home, and they’ve been hustling like crazy to broaden their audience and form connections with lots of other bands. So I wanted to start by asking, how did you get the band together?

AS: I can actually answer this one! So I wrote this riff a while back, and I posted it on my Instagram story. And we had all met at School of Rock in Seekonk, a few months before – maybe three months before that. So we all knew each other. And Anthony liked the riff, ‘cause he messaged me after that and said, “This is sick! Do you have a band? I want in.” And about a month before that I think I talked to Merritt about maybe doing something musically.

AH: The thing is, he had talked to Merritt, and then I saw Merritt at a Tiny Moving Parts show in Providence, and then we were talking, and I was like “Yo, I got this thing going with Aidan, do you wanna join?” And then we just got Derek, because you know, we all know him. And he’s originally a drummer, but he plays bass for this band. I can’t see his face right now, but he’s probably smirking.

AES: That’s really cool! So how has it been being a band so far? Do you feel different? Has the social scene changed for you?

AH: So as a band, the thing is, we fit in with a lot of the local scene, but the thing is, we’re a little bit different than them in a weird way. Our music is a bitt more pop-punk leaning whereas theirs is a bit more emo-leaning, but we’ve got like a mix. We’ve got a lot of heavier sounds in our stuff now. I don’t know what else to say, we’ve just got a lot of everything because we all like different stuff. Like we all have a love for pop punk, but then there’s Derek who like classic rock and the Beatles. Aidan who likes… stuff, and then there’s Merritt who likes emo rap and stuff.

AH: Why are you looking at me like that? Yeah you listen to Issues and Neck Deep, what is Neck Deep? Pop Punk.

AES: Okay now tell me about your song-writing process. Because you have some really interesting musical elements come up in your music, it’s really slick and really smart.

AH: So, we all write songs. Most of the ones that we’ve done right now, Aidan and I wrote most of the lyrics. But there’s also Derek who’s written lyrics and Merritt who’s written lyrics. Normally we’ll come up with lyrics. The thing is, all of our lyrics come off really sad and angry but a lot of them are over-exaggerated or not even about a real person – it’s just a story. Some of them are about real people, and they know who they are.

AES: Yeah that’s really relatable and really interesting. Now how did you get the band name Never Coming Home, what does that mean to you guys?

AS: Who knows why we have our name because I don’t! Well, it’s a line from about a thousand different songs. It’s from A Day To Remember song.

AH: My answer is from a song title “Never Coming Home” by Point North. Merr it’s your turn!

DL: I just thought it was cool.

AH: And then the obvious answer – “The Ghost of You” by My Chemical Romance.

AS: That’s the obvious answer!

DL: If Paul McCartney ever said it then that’s one.

AES: Okay, awesome! And what’s the biggest struggle you’ve had writing so far? Anything come up that’s been tricky to manage?

MC: I can never finish writing a song.

AH: Yeah like I’ll start writing a song and then finish it like months later, and I’m like “wow”. Or like, I’ll write a song and then realize this is really angry and I’m going to have to sing it to all of my friends. This is gonna be fun.

AS: A lot of times it’s hard to avoid using lyrics that come up as cliché or generic. Cheesy rhymes, just things like that. So you wanna be creative.

AH: Like our first single “Runaway”, is so cheesy.  It’s so cheesy!

AH: We wrote it to be like a catchy rock song like “hey, we can leave we can go do cool stuff”, you know what I mean if you’ve heard the song.

AES: Yeah it’s a great song! I definitely see that it was meant to be a very obvious pop punk anthem in many ways. Actually, it reminded me of that Patty Walters parody video, “Song about a Girl”, making fun of pop punk. Is that kind of what you were doing?

DL: [Grins and nods] Yeah I just walk around like “where’s the pizza in this joint”?

AES: Yeah that’s so funny! So I definitely see those influences. Now where do you see yourself in five years?

AH: Where we see ourselves is, Merritt’s gonna go solo and he’s gonna be a SoundCloud rapper. I think Derek and I are gonna revive our old progressive rock band, Sour Vision. That’s what’s gonna happen.

DL: I just think, we’re gonna accidentally leave Aidan behind at a venue and he’s not gonna know where to go.

AS: I’ll speak for the entire band without consulting any of you guys first. I’d like to think that five years from now we’ll be playing a little bit more than just bar shows and expand. 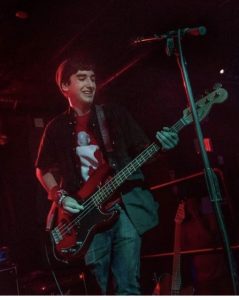 DL: We’re gonna play on the street in front of a hat and hope that people give us things.

AES: You guys are networking though! You’re working really hard and that shows!

AH: We’ll be playing shows across New England. Five years is a long time, I wanna play across the United States by then!

AES: I’m really impressed honestly! Any advice you’d give to any other musicians that are looking to do something similar?

AH: Basically, when you start writing, a lot of people have come to me like “oh I want to start songwriting.” And I’m like, “first of all, why are you asking me this? I don’t write good songs”. But the thing is, you start off writing, all of your songs are going to be horrible and cheesy as hell. But as long as you write for a long time and you just kinda don’t overthink it, you just do it. And for being a musician, go to local shows. Listen to local bands, and go see them. Talk to promoters, set something up. Figure something out.

AES: Yeah, absolutely! And you guys are still in high school, so you’re juggling all this stuff with your schoolwork, and all your other responsibilities.

AH: It’s very hard to do that. We’re in eleventh grade.

MC: School keeps us from being able to practice and write and record.

AH: [jokes “We hate school, we only like pizza and pop-punk!”]

AES: So what are your plans after school?

AES: No, I mean when you graduate.

AH: Yeah, same. People always make fun of me for this but I don’t really have any want to go to college. If you wanna play music, and if it makes it that far since we’re starting off early, hopefully by the time that it would be to go to college, we’ll be at the point where we can actually tour, and make money off of it to make a living. I don’t wanna be rich. I’d like to just make a living off of doing what I want to do, instead of doing something I don’t want to do and being the richest person in the world.

DL: Very profound, you should write lyrics about that. 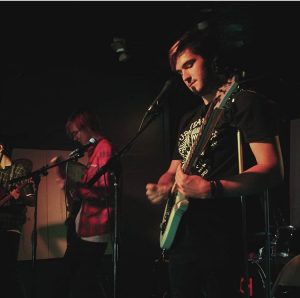 AS: I agree with that, and honestly I don’t care what I’m doing as long as it’s in music. Like I’ll be a tour bus driver if I have to be. I’ll do whatever it takes.

AH: Can you drive our bus?

AS: I’ll have to drive our bus because Merritt has road rage and he can’t.

MC: Why would you say something about me that isn’t true?

AH: No, it is true! I had a dream that we were in a van and Merritt was driving and we were on vacation on an island or something and he was like “yo, watch this” and he ran over like four peoples’ lawns and a mailbox.

AS: Oh, he was pushing my wheelchair at Warped Tour, he hit like twenty people!

AH: We should preface this and say that Aidan is in a wheelchair, we should just say that so we don’t sound like idiots always putting him in wheeled things and pushing him into stuff. That probably makes it sound worse, to be honest.

DL: The only reason we’re in a band is because we have more fun making fun of each other than anyone else.

AES: On that note, any last thoughts for your fans? Because you’re getting fans, your audience is growing, and it’s very impressive!

AH: December and January we’re gonna be taking off to work on [our EP] “After Party”. We have a single coming out next month, you know the big news about that!

AES: I do know the huge news for this one! Stay tuned because it’s massive.

AES: I will not leak it, I promise! But I am very stoked about this news, guys. Stay tuned, it’s big.

AH: And then after the EP, we’re gonna play a bunch of shows and then hopefully record a full album. We don’t know if that’s possible yet but we really want to. We have like sixteen songs ready for a full album.

AES: Very exciting! Well guys, you heard it here first. The big news is coming, stay tuned for that, and keep an eye out for Never Coming Home because they’re gonna be huge someday.