In their pursuit of pitching, the Sox should steer clear of Shields 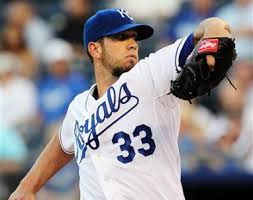 The Major League Baseball free agency period is set to begin after the stroke of midnight tonight and the Red Sox are sure to be in on the talks with nearly every free agent pitcher worth his salt on the market.  If I could give general manager Ben Cherington one piece of advice before the Sox set out to sign the staff ace they are so sorely lacking, it would be this.

“Big Game James” is the biggest misnomer in baseball and you need to look no further than his performance in the remarkable run that the Kansas City Royals made to the 7th game of the World Series that ended a little over a week ago to see why.  “Big Game” put up big numbers in baseball’s second season and not in a good way.

The Royals so-called ace was anything but, compiling a 1-2 record with an ERA of 6.12 and lost both starts he had on the game’s biggest stage, including getting whacked around for 5 earned runs in just 3 innings in game 1 of the Series against San Francisco Giants.

He is a career 3-6 pitcher in the playoffs with a 5.46 earned run average in 11 starts.  That’s not exactly what Red Sox fans would be looking for from a guy they call Big Game James.

Only once, in 2011, has he won more than 15 games and that coincided with the only season he has had an ERA under 3.00.  He will turn 33 years old on December 20th and according to the Boston Globe’s Nick Cafardo, “he could command a five-year deal for north of $100 million.”

Five years and north of $100 million – all for a guy who will be 3 years north of the age at which “virtually all the overpaid players are over 30” according to John Henry’s remarks to Bloomberg Businessweek’s Joshua Green earlier this year – is not just a reach, it would be sillier than someone still calling Shields “Big Game”.

By now we all know that Larry Lucchino’s low ball approach to Jon Lester – a guy who had just pitched his team to a most improbable World Series title just months before – was an unmitigated disaster, one that will cost the team millions of dollars this year and most likely a homegrown talent in the future.

The odds of Lester signing back with the Red Sox look to be even less than Shields living up to his “Big Game” name anytime soon.  The Sox one time horse may love it in Boston, but it is very likely he did not like the way he was treated last spring and there will be no hometown discounts available anymore.

(As an aside, once Lester signs with another club in the next few days we will most likely get some sort of back story surrounding the negotiations with Lucchino and the not so loquacious lefty leaking from a source on Lansdowne St.  There is always a back story with Larry Lucchino when it comes to players or managers leaving the team on not so friendly terms.  Always.)

The option of chasing after a Cole Hamels from the Phillies or a Johnny Cueto from the Reds via trade might be the best route the Red Sox can take when it comes to filling the void left by the loss Lester at the top of their rotation.

It is highly unlikely that the Red Sox will be players in the chase of Detroit Tigers free agent righty Max Scherzer.  Scherzer, like Lester, is 30 years old and again according to Cafardo “is expected to haul in upward of $175 million.”

Talk about being overpaid.

The fact of the matter is once you get past Scherzer and Lester the free agent pool of pitchers is pretty shallow which is why someone will overpay for Shields.

If they hope to have a bounce back season and be in contention next year, those in Red Sox Nation should be hoping and praying it is not the team that calls the lyric little bandbox on Yawkey Way home that does.