In order to bounce back after the break, the Bruins need to think big 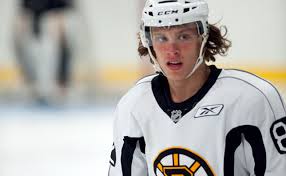 In a story that ran on Christmas day in the Boston Globe, resident beat reporter Fluto Shinzawa wrote that following his stint in the World Junior Championships in Canada this week for his native Czech Republic, Bruins rookie David Pastrnak will rejoin the big club in Pittsburgh for a game against the Penguins on January 7th.  Pastrnak’s return, according to Shinzawa, will be on the B’s top line joining a now seemingly healthy David Krejci and a middling at best this season, Milan Lucic.

This would seem to be a no-brainer as the Bruins have struggled to score goals and have been skating the equivalent of a “vacant” sign on the right wing of their top line all season.  Krejci’s return to health coupled with Pastrnak’s speed, nose for the puck and willingness to shoot first could be the shot in the arm the Bruins’ top center was asking for on his right side before the team went into the Christmas break.

It is a start, but the Bruins can’t stop there.

General Manager Peter Chiarelli needs to inject size into the B’s lineup in order to get back to the style of play that made the Bruins big and bad and feared throughout the league.  After having players that play with a physical edge not so surgically removed from their lineup – players like Jarome Iginla, Shawn Thornton and Johnny Boychuk to name a few – the B’s have morphed into a group of smurfs that are light on the puck and fail to make their opponents pay the price for venturing into the dirty areas in both zones.

So what is the solution?  If I knew that I would be sitting in the Bruins management box on the 9th floor of the Garden on game nights instead of in seat N6 in the press section.

But I do have some suggestions.

First, Chiarelli should blow up his fourth line like he hinted he was going to do when the season ended last summer.  Out of the pair of remnants from the famed Merlot Line, Gregory Campbell and Daniel Paille, one – if not both – needs to go.  What the Bruins get in return really doesn’t matter, as their combined $2.9 million cost against the salary cap according to Capgeek.com, would be return enough.

The Bruins could easily slide the quicker Seth Griffith or Ryan Spooner into Campbell’s spot, and if they are looking to add grit along with size, they could recall the 6’ 4” Justin Florek from Providence to skate on his left side and alternate between tough guy Bobby Robins and Craig Cunningham on his right.  Robins made the team out of camp and could give the B’s the snarl they are missing when circumstances called for it, and Cunningham has shown he can play a bottom six role in the NHL.

But in order to do what needs to be done to bring the Bruins back into being a real Stanley Cup contender this spring, the B’s boss needs to be willing to do something big. That could mean moving some of what the Bruins got when they traded Tyler Seguin to the Dallas Stars a year and a half ago for Loui Eriksson and Reilly Smith, or trading one of their core players who won them a Cup in 2011, in Milan Lucic or Brad Marchand.

As if the ghost of Dit Clapper was in the ear of the hockey gods leading up to the holiday, Eriksson has finally shown flashes of being able to put the puck in the back of the net recently.  Instead of crossing their fingers and hoping that he has finally turned a corner, the Bruins should see if his recent hot streak has created some interest across the league.  Perhaps some combination of Eriksson, defensemen Torey Krug and Joe Morrow would peak some interest from the Winnipeg Jets in return for Dustin Byfuglien.

The Jets – who have been looking for help on defense and had Byfuglien on their backline when the Bruins lost to them 2-1 last Friday night – may look at Eriksson as a top six guy capable of playing on their top line, and either Krug or Morrow would give them a puck moving defenseman that they currently lack.

Byfuglien – who appeared to be in the best shape of his career when the Bruins passed through the Canadian prairie a week ago – would give the Bruins the size they are lacking along with some snarl.  Being a right hand shot he could slide into the top line slot should Pastrnak not pan out, and his versatility could make him a presence on the point for the B’s power play.

The holidays are over for Peter Chiarelli and the Bruins front office.  They need to correct their mistakes over the past year and add some size and talent if they truly believe they can get back to contender status this season.  Time is ticking and Santa Clause has left the building.  It is up to the B’s boss to make a bold move before it is too late.