IN BILL WE TRUST? 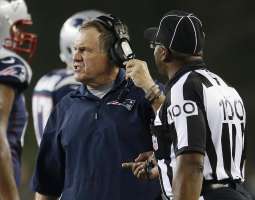 While the majority of Patriots fans will blindly chant “in Bill we trust” following that pathetic performance last night that saw the heavily favored Pats eek out a win against a woeful New York Jets team, Tom Brady must be asking himself, “what have I done?”

It was just a few months ago when Brady renegotiated his contract to give the Patriots salary cap flexibility for what at the time seemed to be to sign Wes Welker and to add to a defense that has been sub par for the better part of the last 5 years.  Instead Brady wakes up this morning facing the cold reality that all he did was help Bill Belichick add to Bob Kraft’s bottom line and allow the coach set a record for signing undrafted free agents.

Before all of you coach Bill toadies get your hoodies in a tizzy I will concede that the Patriots, as constituted, will win the AFC East.  Big Deal.  How many hats and t-shirts does Brady and Bill already have?  Is it really about division titles anymore?  It is the twilight of both of their careers and it is a time when they should be shooting for the stars not shopping at Walmart for bargain basement deals.

After two games it looks as if this Patriots team has more holes than it takes to fill Albert Hall on both sides of the ball and while they had the cap room and the opportunity to add/retain depth to the roster in the off season Bill once again decided to do it his way and shop for bargains rather than pay for proven commodities.  The result is a defense that continues to struggle against rookie quarterbacks and an offense devoid of wide receiver targets for one of the best QB’s to ever play the game.

Sounds like the way a genius goes about building a Super Bowl championship level team don’t you think?

Do you think Tom Brady would like to look up in the huddle and see Wes Welker and Anquan Boldin instead of Brandon Bolden and Kenbrell Thompkins?  After watching the performance of this Patriots secondary do you think that they might be a little better with the likes of Glover Quin or Dashon Goldson in the defensive backfield?

Instead coach Bill decided to stand pat (pun intended) and seek value over proven production and the mess you saw the first two weeks of the season is the result.  Sure all of you Bill Belichick toadies will be rewarded with your hats and t-shirts in December just don’t expect to be watching your team play in February.

In Bill we trust, really?