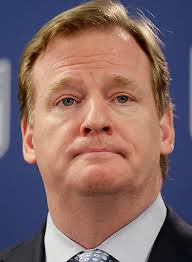 Does anyone buy that bunch of bull that Roger Goodell was shoveling at his press conference on Friday?  Don’t be fooled, the NFL – and Roger Goodell in particular – does not care about changing the culture that leads to domestic assault and sexual assault, they care only about protecting the gravy train that is the game of football.

One thing that was crystal clear during the dog and pony show this afternoon was that the initials NFL currently stands for No Functioning Leadership.  If the owners of the league want the general public – and more importantly their advertising partners – to believe that they are really going to change the way they police the players who violate the law in such an obscene and egregious fashion, they need new leadership to lead them in a new direction.

The bottom line is Roger Goodell must go.

It really can’t get any worse for the NFL right now.  On a weekly basis there seems to be one black eye after another that further damages the image of the league.  It would be bad enough if it were handled with the iron fist that Goodell seemed to employ when it came players who tested positive for recreational drug use, but the “mistake” the commissioner made when it came to the Ray Rice incident is simply inexcusable.

The sad part is the league actually thought they could make this whole thing go away by simply having Bob Kraft go one of the league’s “broadcast partners” morning show and glad-hand the hosts while offering a hearty endorsement of the job Goodell has done.

There is no getting around it; the owners in the NFL think that the viewing public are a bunch of brain-dead morons who care about nothing more than what happens on Sunday at 1 pm (or Sunday night, Monday night, Thursday night and every other night soon if they have their way…).  They think that you will buy whatever they tell you to buy because, hell, you have up until now, right?

Despite the fact that the product on the field is often times mediocre at best – especially in the league’s primetime schedule – the game is fueled by the American public’s gambling obsession and no game is better to bet on than football.

I dare you to find more than one out of ten fans of football on a Sunday afternoon that does not have a fantasy team playing, a pick ‘em pool sheet in play, or a wager with their friendly neighborhood bookmaker.  It is the only reason why anyone in their right mind suffered through even the first half of last night’s 56-14 debacle between the Atlanta Falcons and the Tampa Bay Buccaneers (You had Atlanta and the over, right?).

For years the league has ignored the fact that they had a concussion issue until a lawsuit by former players forced them to acknowledge it and change the way they handled it.  Similarly incidents like the Rice’s cold cocking his soon to be bride and standing over her admiring his handy work were swept under the rug because we never say the video tape of it taking place.

The NFL isn’t now changing their ways now when it comes to how they handle the Ray Rice’s, Adrian Peterson’s and Jonathan Dwyer’s of the league because they care about the health and well being of women and children, they are changing because they don’t want to stop sharing the boatloads of cash that their golden goose continues to lay season after season.

The NFL owners pay Roger Goodell to “protect the shield” and most importantly to protect them.  He has failed at both.  If they really want us to believe that they are going to change the way they handle internal issues of such importance they must first change their leadership.

Kevin Flanagan is a Boston Sports Desk Correspondent.  He can be reached at Bsdkevinflanagan@yahoo.com or on Twitter @KevinMFlanagan