It has long been the most common of foibles of sports fans – especially in the last century in which those who have been blessed with athletic skills are set apart from the rest of us who could only play the games we grew up loving at the most rudimentary level – that we somehow elevate the most physically gifted among us to a level of personal esteem that is frankly unfair to those who we cheer for and the players themselves who can get lost in the adoration that usually begins at an early age.

The same is true regarding those who are the driving force behind the teams that so many identify themselves so closely with, that they feel like the laundry that are the uniforms those these elite physical specimens sport, and therefore become the epitome of what the term “fan” is derived from.

And before those who carry the banners of the local Boston sports franchises the way one would carry the Stars and Stripes in a 4th of July parade begin to get their backs up – I’ve been there, done that and will continue to likely until the day the great Zamboni in the sky gives my icy cold corpse one last fresh dose of water following my final period on this planet.

If you can’t recognize the hypocrisy that hangs like a tainted halo over the once most farcical franchise in the history of professional sport in New England, you are not only a fan; you are a sycophant. 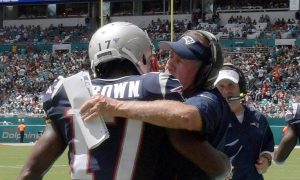 Patriots head coach Bill Belichick embraces Antonio Brown following his only touchdown as a member of the team in Miami last month.

Prior to the hallowed hoodie wearing head coach/pigskin savant who has worked his way into practical sainthood among Pats fans by snorting his way to six Super Bowl titles in his 20-plus years pulling the strings – and pushing the envelope of the myth of sportsmanship that doesn’t exist in any athletic program that produces cash the way the NFL does for any entity that has their dirty fingers in the filthy pie that is the most popular sport in the Eastern Hemisphere – on Route 1 in Foxboro, worshipers of the Flying Elvis logo were pretty much one sided when it came to their misguided piety they placed in the polarizing team that calls Foxboro home.

The nearly 3,000 listeners of the barely listenable Greg Hill Show on WEEI who responded to a Twitter poll on the fading sports radio station overwhelmingly were against the idea Bill Belichick signing Antonio Brown to their beloved football team on the Friday before the Prince of Darkness signed the DB – who goes by the nickname AB – to a controversial contract after the first game of the season.

However, less than three days later, that same sanctimonious self-serving group that will probably go to their graves requesting “In Bill We Trust” be carved into their tombstones, suddenly saw the light and decided that the deadbeat prima-donna who they would soon come to find out would face accusations of sexual assault would fit nicely in a Patriots jersey if it meant their team would have a better chance of winning an unprecedented 7th Lombardi Trophy next February.

And while there wasn’t a videotape of his supposed misdeed like there is in Kraft’s dalliance prior to the AFC Championship game against the Kansas City Chiefs last winter, the mindless miscreant who could not stay off social media even though he had been given the NFL’s equivalent of a winning lottery ticket after he shot his way out of two organizations in less than six months and found himself lining up beside the best quarterback to ever play the game lit it on fire.

Instead of becoming the favorite target on the GOAT and odds-on favorite to repeat as Super Bowl Champions, the clueless coward continued to take to social media to belittle those he almost surely did wrong to more than once in the past.

Yet, even facing the overwhelming evidence that moron was morally reprehensible, it was clear to anyone who was paying attention – even as a threatening text message to a struggling artist that the self-consumed intellectual cue ball became public – both Bill Belichick and Tom Brady were more than content to see no evil, hear no evil, and speak no evil when it came to the elite athlete that could quite possibly deliver them another title.

The fact that the obviously reprehensible character that cared about nothing more than himself simply another source of outside noise that they have learned to ignore better than any other tandem in the history of professional sports.

Perhaps the most ironic part of this story is that the moral compass that ended up jettisoning this jerk was the owner who was exposed this Friday in a piece that ran in Vanity Fair, about how he was boasting to a buddy about the rub and tug he found so enjoyable the first time, he went back for a second before boarding his private jet to watch his football team play their way to the 9th Super Bowl appearance featuring the greatest coach/quarterback tandem of all time. 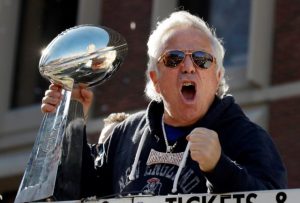 The following is a partial account of what happened at the seedy strip mall in south Florida late last January.

“At Orchids, according to the Jupiter police, Kraft paid cash to the spa’s co-owner, Lei Wang, who goes by Lulu, and received a hand job from her and another worker, later identified as Shen Mingbi. After Kraft ejaculated, Mingbi wiped his penis with a white towel. Then she and Lulu helped him get dressed.

As Kraft left the spa in the white Bentley, Officer Scott Kimbark, nicknamed Bark, stopped the car for a minor traffic violation. Kraft asked the officer if he was a Miami Dolphins fan and showed him his Super Bowl ring, explaining that he was the owner of the Patriots. Kimbark, having accomplished his mission, let Kraft and Bernon go with a warning.

Later that day, Kraft called his friend. “You won’t believe what happened to me,” his friend recalls him bragging. Kraft explained how he had gone for what he thought was a regular massage, but that the masseuse had given him a hand job instead.

The friend excoriated Kraft for getting a “rub and tug.” Kraft, seemingly hurt, insisted that it “wasn’t like that.” He said he had felt a real connection with Lulu and Mingbi.

Later that evening, Kraft received a call from Orchids, asking him to visit again. (At the time, Kraft’s number in Palm Beach was publicly listed.) Kraft, according to his friend, was thrilled. He did not seem to understand that the spa was merely soliciting repeat business.

The next day, Kraft returned to Orchids, this time with a driver in a 2015 blue Bentley. He arrived before 11 a.m., qualifying for the early bird special: $15 off. He received a hand job and a blow job from Lulu, and left after 14 minutes. That afternoon he flew to Kansas City, to watch his team play the Chiefs in the NFL playoffs. The Patriots won.”

While the Patriots owner would later apologize – and therefore for all intents and purposes admit his guilt as a solicitor of unlawful sexual favors – weeks later, he quickly hired a team of lawyers that would eventually take the spotlight off is silly indiscretion, even though he remains to this day the butt of jokes for his pair of paid happy endings.

Kraft would later leak stories to the press stating that he never would have signed Brown if he knew about the pending civil case facing Tom Brady’s newest – and apparently, still valued – toy, I find it hard to believe that the guy who is best known for his research and preparation when it comes to all things football – the seemingly Teflon titan of the former laughingstock Patriots franchise – didn’t do his due diligence when it came to the dopey wideout that would washout in only 11 days with the sports most dominant franchise of the 21st century.

And even after the team’s owner supposedly forced the hand of the Don that seemingly has had autonomy over football operations since Adam Vinatieri’s last-second field goal sailed through the uprights in New Orleans in February 2002 when it came to parting ways with the wayward wide receiver,  The cleft-chinned QB with the squeaky-clean image is still pining for the punk that he no-doubt thought would help deliver his 7th ring to him at the owner’s over the top abode in Brookline next spring.

TB12 – or more likely the minions that run his social media accounts that he has given a mandate to – is the first to “like” Brown’s often bizarre Instagram posts as he continues to pout about the weapons – or lack thereof – that he has at his disposal after the owner made sure Belichick sent the deranged dipshit packing after less than two weeks with the Pats.

“Those guys are trying,” the petulant sounding passer said, talking about the young targets that the team has remaining on the roster. “They’re young. I was young; I was trying once, too. I just didn’t have to play my first year, so it’s a little different.”

“I think one thing we talk about here is just doing our jobs,” said the somewhat selfish sounding 42-year-old signal caller earlier this week.

“I’ve always said the best teammates are the ones that I have to think about the least, because I don’t want to spend my mental energy on things that aren’t really my job. … I think what makes a good team is just people doing their job, doing it the best way they can, and that’s what my responsibility is.”

For a franchise that has long embraced the over-hyped “Patriot Way”, the greatest player in the history of the game just gave you the true definition.

Win at any cost.  And don’t forget to give a generous tip to your “masseuse”.