Hockey legends and a guy named Steve – Rick Middleton and the Bruins Alumni prove that hockey isn’t just a game, its a family

On Sunday, October 7th, the Boston Bruins Alumni began their season at the New England Sports Village in Attleboro, Massachusetts.  The squad’s roster varies by venue – and as schedules allow –  even so, it is likely to feature B’s legends like Ray Bourque, Terry O’Reilly, and Reggie Lemelin who played for years for the Black and Gold.

However – since the way you qualify for the roster is by pulling on a Spoked-B sweater for at least one NHL game – you are also likely to see guys like Bill Bennett, who took to the sheet for the Bruins for seven games in the 1978-79 season.  The Alumni play approximately 30 games a year, during their tour across New England and parts of Canada raising money for local charities in the areas they visit.

One of the franchise greats you will almost always see suiting up no matter the site is should be NHL Hall of Famer Rick Middleton, who will have his number 16 retired by the Bruins on November 29th, before a game against the New York Islanders at the TD Garden.

Middleton – who is in his 10th year as President of the Bruins Alumni team – was not only playing in the game against the Team M&M – and helping to raise money for the AA/MDS Michael Fernandes research Grant and the MOB Foundation (Cousins for a Cause) – but he was playing host for a guy that fancies himself as a pretty skilled hockey player in his own right, longtime Brockton resident and businessman, Steve Pickett.

Many thanks to the #BruinsAlumni. Hockey players always take care of their own. #FriendsOfPic.

Steve – known as “Pic” to his friends – skated in the slot for Cardinal Spellman High School in his hometown in the 1970’s, right around the time that Middleton was earning his well-deserved nickname “Nifty”.  While Nifty could dish it and dangle it with the best at the NHL level, Pic was more of a – as we called it back in the day – a “hun” with the puck, which wasn’t exactly appreciated by his linemates at the time.

In fact, as longtime friend and former linemate Dave “Gov” Galvin remembers, he called his wingers “decoys”.  And after all these years, Pic’s recollection – no surprise here – is quite different. 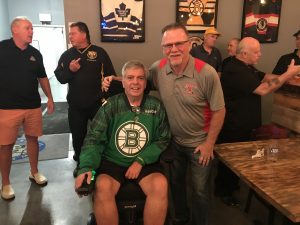 “The more I think about it, Gov always lagged behind the play,” said the stingy passing former pivot.  “Often times, he wasn’t even in the offensive zone, so I had no one to pass the puck to.

“So after I scored, I would pass the puck to the referee and tell Gov to line up at center ice for the faceoff.”

Needless to say, this subject gets broached from time to time when the lifelong friends get together over a beer, with each of former players’ skillsets growing by leaps and bounds.

This wasn’t the first meeting of the two former hockey heroes, the first took place last fall at Tin Ray’s restaurant in Brockton last fall.  That’s when the two – along with a group of Pic’s friends – shared some pizza and a couple of beers while talking hockey for a couple of hours.

While Middleton’s story is familiar to almost any Bruins fan across New England and beyond.  Pickett’s may not be.

On October 30th in 2015, Steve got the diagnosis he had been dreading.  His doctor told him he had ALS, or amyotrophic lateral sclerosis, which due to lack of funding for research is quite literally a death sentence.  And even though he had received devastating news, Pic reacted like the hockey player he is and was hellbent to fight through adversity.

He became the voice of ALS One – an organization that was started by Kevin Gosnell who was diagnosed ALS in 2015 and who passed away in 2016 – and has helped raise millions of dollars for research while doing so.

At the time of his diagnosis, Pic was living the American Dream.  He owned and operated two thriving Snap-On Tool franchises where he worked with his son Chris.  His two twin daughters, Kerry and Jessica – a nurse and an occupational therapist, respectively – were blossoming before his eyes.  He was the president of the Club National – a social club in Brockton – and had just finished renovating his house – the Campanelli ranch he grew up in – on Aspen Road in the Brookfield section of the city.

That’s when the fickle hand of fate quite literally gave Pic the finger.

Nevertheless, when he was faced with news that would cause most of us to take ourselves out of the game, Pic did what every hockey player worth his salt would do when faced with injury or adversity.  He got himself as right as he could and jumped right back into the middle of the fray.

However, unlike the 4th line grinder who goes to the room to get stitches to close a cut from a high stick or some fisticuffs, he didn’t just rejoin the game, he took it over.

Since joining forces with Kevin during the infancy stages of ALS One in late 2015, Pic dove in head first to spread the word about this oft-forgotten deadly disease.  When Kevin became too ill to speak, Pic became the voice of the fight.

(Side note:  Those who know him best would tell Pic could talk the ears off of a brass monkey, especially if you ask him about politics or his athletic achievements as a youth.  Somehow he seems to get a step quicker, an inch taller and the goals he scored become more fantastic with each passing year.)

Hockey players are a different breed, anyone who has been around the game at any level knows that.  They will punch their own brother in the face in the heat of battle on the ice – actually, I think my brothers punched me in the face just for fun, everywhere – but they will be the first to offer a helping hand to those they have never even met off it.

Following the game that Sunday – in a bar called The Barn just above the rink – the Bruins Alumni began to gather to share some laughs and a couple of beers.  After a trip to the dressing room for Pic to meet the boys prior to the game was thwarted due to a downed elevator, Middleton took the boys upstairs to see him.

The hockey community is quite different than the other major sports.  A hockey player is a hockey player no matter at what level your career ends.  There is the feeling of being a longtime friend with someone that you have never met when you are around those who love the game.

As the players chatted with Pic and posed for pictures, it was easy to see that he was in his element.  Just another hockey player that loves the game hanging with the guys.

About a week after the game, I called Nifty for another project I was working on and – as always – the first question he asked me was “How is Pic?”.  His genuine concern is just another example of the hockey family looking out for one of its brethren.

As our conversation wound down, I asked Rick a question.  Based on what he had heard about Pic as a player, would he have wanted to have him as a center?  Without hesitation, he said with a chuckle, “With all due respect to Pic, screw that, I’ll take Barry Pederson every day!”

While there is no doubt that the Friends of Pic would go to the ends of the earth to help their brother, it just goes to show that even in the hockey family, there are limits to the love you feel on the ice for someone refuses to pass the puck.  Right, Gov?