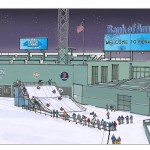 The change was made to accommodate fans who would like to get home in time to watch the 8:15 p.m. divisional playoff game between the New England Patriots and Indianapolis Colts.

Fenway Park gates are scheduled to open at 1:15 p.m.