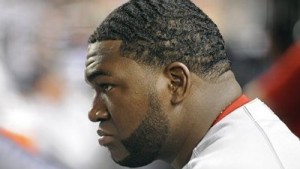 Boston Red Sox David Ortiz sits on the bench during the seventh inning of a baseball game against the New York Yankees Sunday, Aug. 9, 2009 at Yankee Stadium in New York. The Yankees beat the Red Sox 5-2. (AP Photo/Bill Kostroun)