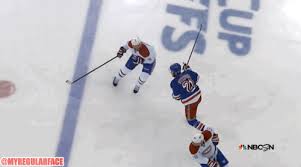 Early in the first period of game 3 of the NHL’s Eastern Conference Finals with his team the Montreal Canadiens trailing the New York Rangers 2-0 in the series, the Canadiens’ resident tough guy Brandon Prust took it upon himself to do something that would stir up his teammates.

Looking to set the tone in the pivotal game 3 with his physical play, he targeted the head of Derek Stepan with his shoulder and delivered a blind side hit that the dastardly derelict Matt Cooke would look upon with envy.

Stepan – who had just played the puck up the boards and was skating out of his own zone and never saw Prust coming – went down in a heap, his jaw broken by the cowardly Canadiens’ shoulder who then skated off as if nothing ever happened.

If the roles were reversed and a Ranger – say Daniel Carcillo for instance – had targeted one of the Habs skilled forwards in Montreal and the results were the same is there any doubt that the 911 phone lines would have been lit up like a Christmas tree and Dudley Do-Right would have been summoned by the Royal Mounties to lock up Carcillo immediately and throw away the key?

Worse yet imagine for a moment if a similar hit occurred a series earlier against the Boston Bruins and someone like Milan Lucic or Zdeno Chara had delivered the blow? The haughty Habs fans would be calling for a public execution.

What a bunch of French speaking frauds.  In explaining away his player’s blatant targeting of Stepan’s head, head hypocrite coach Michel Therrien said, “honestly, Brandon Prust was trying to finish his check.”

This is the same guy who said this after Rangers forward Chris Kreider lost an edge breaking in on Canadiens’ goalie Carey Price in game 1 resulting in an injury that caused him to sit out the series with a leg injury, “Looking at the incident, it’s a reckless play. That’s the truth,” he added “and Kreider, this is not the first time he’s going at goalies.”

Wait, I get it, it is reckless to go to the net hard in playoff game trying to score a goal but when you target an opponents’ head purposely and break his jaw with your shoulder you are only finishing your check?

Let’s face it this is why nearly everyone outside the province of Quebec hates your hockey team.  There has never been a clean hit laid on a Canadiens’ player since – in your minds at least – you invented the game.  Yet when a player wearing the CH on his chest delivers a cowardly blow to an opposing player it is simply a hockey play.

Give me a break.

This hockey holier than thou attitude that pervades the Canadiens’ organization and fans is downright putrid, never mind out dated.  In that silly little ceremony that the Habs put on before every home game they light the Stanley Cup banners (that the majority of which were won because of a grossly unfair territorial drafting process, but that is a story for another day) individually to rally the crowd before some brainwashed pre-teen skates to center ice touching a torch to the Habs logo to set the stadium “on fire”.

Has anyone ever pointed out to the caustic crowd of 21,000 plus that the date on the last banner reads 1993?  That torch may have been put to better use in the Habs front office to light a fire under the team’s executives to do a better job in player development over the past 21 years, no?

Nonetheless, hours before what is sure to be an interesting game 4 at Madison Square Garden, the Canadiens’ sit on their pretentious perch casting petty persuasions at a moronically mesmerized fan base who gobbles them up like jelly beans on Easter morning.

Such vignettes like this from the Habs resident rat Brendan Gallagher saying this about Stepan’s injury, “(Stepan) was yapping and yelling, so I don’t think the jaw was hurting too much.” Or fourth line forward Danny Brier calling the surgically repaired Rangers’ forward out saying, “I think it seems a little fishy to me, it seems like a little bit of a game.”  Comments like this are sure to light a fire under the Broadway Blueshirts Sunday night, the results of which might not be as energizing to the Canadiens as the charade that takes place before every game at the Bell Centre.

The conceited Canadiens might just want to be tone it down a bit going forward in this series however if not they may just find that torch stuck somewhere they don’t want it to go.