Gronk enjoying being back in the playoffs

Does it feel good to be back in the playoffs? 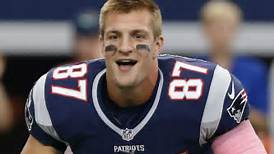 Q: Does it feel like even when you’re covered that you’ve still got to expect the ball?

Q: How different did the offense feel with both Chris Hogan and James White back out there? How big was the penalty on the Titans in the punt situation which you followed up with a 16-play drive?

RG: That was huge. Getting that first down on that and then going down and driving down and scoring. I mean I would say that’s probably a turning point in the game going down there and making that drive after giving that first down on that punt. So that was huge. Overall, everyone just played well together from the receivers to running backs, tight ends. We all just played together as a team, as an offense and our defense did great. So overall it was just a solid team win for sure.

Q: Danny Amendola had 11 catches for 112 yards on 13 targets tonight. Can you describe the impact that he makes on this offense and how it affects what you can do when he’s available, especially in the postseason?

Q: You had a play where you lined up in the backfield before you motioned out. What did that do the defense to change the look and provide that versatility?

RG: It just gives Tom [Brady] a sense of what the defense, what the coverage is going to be when you motion over like that. Just had to go make a play. Tom threw a nice ball. I just made the catch and got some yards.

Q: The defense had eight sacks today. How do you feel on the sideline when you’re watching play like that?

RG: It’s great. I mean our defense balled tonight. They did excellent. Whenever they’re playing well, the offense has got to play well. They were playing super well. They had eight sacks. I mean I saw up on the Jumbotron or whatever ‘Patriots record.’ That just shows how good they played tonight. It’s always great to see that and it was good for the guys.

Q: When you caught that touchdown you helped Tom Brady pass Joe Montana for the most three touchdown playoff games. How does it feel to help Tom get past his boyhood idol?

RG: It’s always great. I swear every game Tom is breaking a new record so it’s nothing new. It’s always great to be a part of it. We don’t really look at that type of stuff. We’re just trying to get the win, play hard but I mean it’s pretty cool to see that. He deserves it. He’s a great player, great teammate and it’s always cool to see that. But overall, what’s most important was getting that win and that’s the best.