It seems his seat in the manager’s office is not the only thing that has been hot in the Red Sox skipper John Farrell’s life lately. In a report in the Boston Globe – which is owned by Sox majority owner John Henry – it was revealed that former CSNNE reporter Jessica Moran resigned her position at the station as rumors swirled regarding a relationship between her, and Farrell was more than professional. 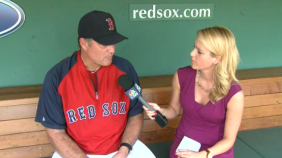 Farrell, for his part, refused to discuss the situation saying only, “My private life is private.”

In recent years, Red Sox ownership has been searching for ways to get more revenue sources from the ancient edifice on Yawkey Way. Fenway Park now is a concert destination in the summer, and a wonderland for snow sports in the winter.

Could it be the next great event at “America’s Most Beloved Ballpark” will be Free Love at Fenway Day? Forget a picnic in the park, when you can have fornication at the Fens!

As anyone who has paid any attention to the team since the Henry led crew has taken over the team, this is nothing new for the Red Sox. The rumors of reporters being involved in relationships with members of the organization date back to Hazel Mae’s alleged trysts with then manager Terry Francona and assorted Sox players.

The pattern continued when Heidi Watney – the blonde bombshell cousin of PGA golfer Nick Watney – was rumored to be the reason that then Red Sox captain Jason Varitek’s 10-year marriage was came to an end. Then there was the recent marriage of former NESN Sox reporter Jenny Dell and 4A baseball player Will Middlebrooks, who got all hot and heavy when Middlebrooks was the third baseman for the team a couple of years ago.

Whether this recent relationship between Farrell and Moran will have any bearing on the slippery slope the Sox skipper is on when it comes to his job is anyone’s guess. Although it would seem to be hypocritical for president of baseball operations Dave Dombrowski, who the Boston Herald’s Gayle Fee pointed out on Sunday, has a history with female sports reporters himself.

Fee writes, “For those of you keeping score, Dombrowski is married to former sports reporter Karie Ross and the two began dating when she covered the Marlins and he was the team’s general manager. Her station said they had no problem with the arrangement. Dombrowski also defended it at the time, telling the Sun Sentinel, “In the time we’ve been dating, I don’t think anyone can point to an instance where Channel 4 had an advantage or got a story because of our relationship.”

Look, it is not like any romance with the much younger Moran could make Farrell any worse at in-game management than he already is. There is a reason he has just one winning season on his resume – the gift from the baseball gods that was the 2013 World Series Championship – and enters the season with his close friend and overpaid bench coach, Torey Lovullo, perched to pounce if he stumbles out of the gate.

Farrell is not Dombrowski’s guy, and is likely only starting the season as the team’s manager due to his cancer diagnosis last August, which coincided with Dombrowski’s hiring. With the way the season was playing out – a second straight last-place finish for the Sox, and a third in four years – Farrell most likely would have been dismissed following the season if not sooner.

Instead, the ever spinning the story Sox were likely worried about the fallout that would come if they fired a cancer survivor, and therefore, the new team president’s hands were tied. However, in desperate need of some positive news to come from camp, the team has instead had to tell Sox fans not to trust their lying eyes when it came to Pablo Sandoval’s weight, and disregard all the reports of Hanley Ramirez’s lack of work ethic learning a new position.

And now this, the spotlight – no matter how briefly – is shining on something other than the team’s performance on the field, which three of the last four years have been downright awful.

It is not a coincidence that the story of the latest affair involving a female member of the press, and someone in the Sox organization was broken by the Globe. No doubt, John Henry wanted the club to be out in front of the story, and by reporting it first, they could partially control the spin.

For Farrell’s sake, he had better hope his team hits the ground running out of the gate. Otherwise, his dismissal will be just another sad episode in the soap opera Henry’s team has become over the past five years.

Not even team chairman Tom Werner – who is primarily responsible for the poor programming on the team’s network – would want that.