Forget Deflategate, Hategate is the driving force behind Patriots firestorm 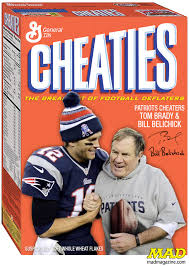 By now you have heard all the names, the Deflatriots, the New England Cheatriots, Bill Belicheat, the list goes on and on.  The talk of Tom Brady and his love for soft balls has ignited a bevy of sophomoric jokes, but more than that, it has unleashed the hate for what may now be the most despised franchise in professional sports.

Entering Sunday night’s AFC Championship game, members of Patriots Nation were hopeful that their team was finally going to stick it in the face of all the naysayers and name-callers.  They finally had a defense that could be a game changer and, of course, they still had Brady and Belichick, the best quarterback to ever play the game and the smartest guy in any room.

But instead, someone employed by the Patriots stuck a needle in the dozen game balls after they were inspected by the officials, and Deflategate was born.  And while the talk will continue to swirl and the fires will be stoked as the team prepares to head to Arizona this weekend, the fact of the matter is what is playing out in the court of public opinion has little to do with who told who to take a little air out of the footballs in Foxboro last weekend, it has to do with one thing.

The somebody done somebody wrong song that anyone that works at any ESPN affiliate, or was on the losing end of one of the Patriots many victories over the past 14 years, is singing is driven by their insatiable need to cast aspersions on the team that everyone loves to hate.

Don’t get me wrong, the Patriots are far from innocent here.  They broke the rules when they filmed defensive signals after being told not to in 2007, and they broke the rules when they deflated the footballs in the AFC Championship game last Sunday.  Last time I checked, cheating was defined as breaking the rules to gain an unfair advantage.  Parse that any way you would like Pats fans, but if the shoe fits…

However well deserved their reputation has become as a team that will do anything that it takes to win, this over the top reaction to what I am willing to bet every team has done at one time or another, simply indicates how deep the bad blood runs when it comes to Belichick, and now Brady.

The extraordinary vitriol coming from every corner of the sporting world is nothing short of ridiculous.  Calls for Belichick to be fired, Brady to be suspended for the Super Bowl, or – perhaps my favorite – the Patriots should vacate the AFC Championship and the Indianapolis Colts should play in their place, are beyond absurd.

We have all heard the saying before, “if you ain’t cheatin’, you ain’t tryin”.  Every team in the NFL – the smart and successful ones, anyway – try to find a way every week to gain an advantage on their opponents through marginal means.  Whether it is trick plays, deceptive formations, altering conditions in visiting locker rooms, or doctoring footballs, every team has pushed the rules to stack the odds in their favor.

The problem with the Patriots is they are so smart they are stupid.  Their air of arrogance has rubbed so many people the wrong way that the level of loathing they have achieved is astronomical.  So when your cleft chin quarterback takes great pleasure in telling a rival they just barely defeated in the playoffs to “study the rule book”, you have got to think that given the chance, that rival will help shove said rule book right up the blowhard’s backside.

The theories on what caused the Pats to get caught letting a little air out of the football with probably never cease.  And neither will the hatred that is felt throughout the game and beyond, a hatred that has perhaps the greatest coach and quarterback the game has ever known counted as public enemy number one in the world of sports.

Hategate is here to stay, have no doubt about that.  And the Patriots have no one to blame but themselves for it.