For the struggling Sox, its time to get back to the future

To say that the Red Sox have taken an arrogant approach to defending their record-breaking 2018 World Series winning season might just be an understatement.  In fact, their 2-8 start to the season is only two losses away from matching the 2-10 start that the 2011 squad – the one that the Boston Herald labeled “the best team EVER” – posted out of the gate, and we all know how that turned out. 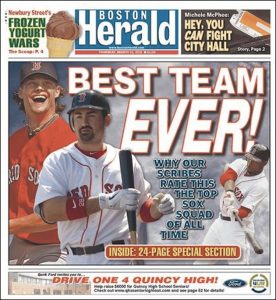 Anyone want any chicken and beer while they watch the road trip from hell ending tilt against the Diamondbacks in Arizona this afternoon?  I didn’t think so.

Let’s face it, pretty much every move that then-rookie manager Alex Cora made last season seemingly was the right one.  He almost always pulled pitchers at the right time, he seemed prescient when it came to pinch-hitters, and his best move came when he convinced team president Dave Dombrowski to kick Hanley “The Hound” Ramirez to the curb late last May.

Nevertheless, for as much as he had a Midas touch during his first season as manager, things haven’t exactly been peaches and cream for Cora’s crew to start this season.

“We’re talented. We’ll be fine. We will be fine. Just show up tomorrow, play hard, win the game, have a better taste, get on the flight, and kind of breathe a little bit,” said Cora following the 5-4 walk-off loss on Saturday night against the D-backs, yet another disappointing result in an early season that has seen plenty of them.

“On Monday, there’s no workout, there’s no nothing, enjoy your family. Can’t wait to see my twins and my daughter, just hang out, and just kind of get away from the whole madness and get them again.”

If Cora thinks his team has seen madness during their opening season West Coast swing, just wait until his underachieving crew makes its way back to Boston.  Sure, the cheers will be overwhelming – and likely over the top when it comes to someone like the highly criticized David Price – during the ring ceremony at Fenway on Tuesday afternoon against Toronto, but if the Red Sox blow chunks against the Blue Jays in the game that follows, don’t be surprised if the boo-birds make an early appearance at the ballpark that was formerly on Yawkey Way.

When asked about the reception that the Sox will get when they open the season at the lyrical little ballpark in the Fens on Tuesday, Price said, “Cheers, I hope.  I don’t think anybody has ever gotten their World Series rings and gotten booed. I think we’ll get cheered.”

And, undoubtedly, cheers there will be.  However, unless or until they realize that a new year has started and they are no longer the team that took a celebrated duck boat tour through the city last November – no matter how many players from that roster returned for this season – their honeymoon with a fan base that expects only the best out of the teams they pay through the nose to see, will be very short-lived.

“It’s frustrating,” Price said after he quickly surrendered the three-run lead he helped create with an RBI single in the second, only to surrender 4 runs in the bottom half of the inning.

“Everybody in here is frustrated. We’ve been through a lot together, this group of guys together, for the last two or three years. So we’ll be OK. I think everybody in here understands that. And we just have to take it one game at a time, just like we did last year when we won 108 games, 119 on the season and were World Series champions. We just need to get back home and all our fans will remind us how good we are.”

Until they realize that they are not the 2018 Red Sox anymore they will never be as good as they can be.  Those are the cold, hard facts that this team has to face.  Otherwise, the celebration that was so much fun six months ago, might just lead to a summer of misery that no one wants to go through.

Maybe Cora might want to call Terry Francona and ask him about how much fun he and his team had in the ’11 campaign.  Arrogance has its blowback, especially in a baseball city like Boston.