For Pats to advance it may depend on Luck 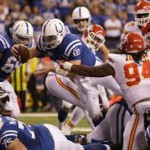 Just like his predecessor Peyton Manning, Andrew Luck will be taking his Indianapolis Colts team to Foxboro to face Tom Brady and the Patriots for a prime time showdown on a Saturday night in January for the right to advance to the AFC Championship game the following week, possibly against Manning himself in Denver.

The Colts advanced after Luck and his offense mounted a comeback for the ages in the second half of Saturday’s wild card game against the Kansas City Chiefs, a comeback that saw them erase a third quarter deficit of 38-10 and showed why Luck might just be everything he has been said to be.  Despite throwing 3 interceptions, the sophomore ‘slinger threw for 443 yards and 4 scores and was Johnny-on-the-spot when running back Donald Brown fumbled at the 3 yard line.  As the ball bounced off his center’s helmet and toward Luck, he calmly scooped it up and dove in for the touchdown.

Talk about serendipity.  The man with the last name that surely has been the butt of countless jokes showed the football watching world what’s in a name on that play. Instant classic.

However, if you listen to the pundits or the talking heads on sports radio today you would think that the game against the Colts is a mere formality, a stepping stone for the Pats to use to get one win away from a sixth Super Bowl appearance for Messrs. Belichick and Brady.  The Colts don’t have a defense, they only have one receiver, they can’t run the ball…yada, yada, yada.

This just in, your defense is no great shakes either, Patriots Nation.  In fact it could be argued that everything that Andrew Luck and the Colts offense did to a Chiefs defense that ranked 5th best in the league for points allowed this season they could do to your defense and more.  Watching the game film of Saturday night’s comeback from the 13 minute mark of the 3rd quarter until the end of the game is likely causing the hooded high priest of pigskin to loose sleep this week because he knows his team is just as capable of surrendering points at a perilous pace as the Chiefs did during the 2nd half from the opening whistle.

While the Patriots can and should score on Saturday night, whether they can keep Luck from doing what he did in the 2nd half against Kansas City for the entire game is a different story altogether.  T.Y. Hilton, Luck’s new favorite target since Reggie Wayne was injured and out for the season, is a quick, small receiver, just the type that has given cornerback Aqib Talib fits over his career.  Tight end Coby Fleener is Rob Gronkowski lite, minus the run-ins with strippers, broken arm back flips and season ending injuries.

Where all this false bravado regarding the Patriots rolling over the Colts this Saturday comes from is puzzling to say the least.  After watching this wild card weekend’s games it is even more apparent to me that there are no great teams in the NFL anymore and the old cliche “any given Sunday” applies now more than ever.

Bottom line in today’s NFL is if you have a quarterback you have a chance and in Andrew Luck the Colts might just have one of the next great ones for the next decade plus.  And despite what the honks on talk radio and the callers that call their shows may say, there is no such thing as stepping stone games in the NFL playoffs anymore.

I bet if you asked any of those 53 guys in the Indianapolis locker room or the coaching staff today what they thought their chances were coming to Foxboro Saturday night they would say to a man they would be happy to try their Luck.