For a night at least, Rusney’s the reason to put your Sox back on

This just in, for the first time since the middle of May there is actually a reason to tune in 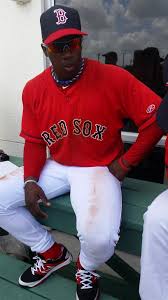 and watch the Red Sox game tonight.  That’s right, tonight at PNC Park in Pittsburgh the Sox centerfielder of the future, Rusney Castillo, makes his major league debut for a team desperate to have something for their remaining fans care about.

Maybe you are a get-a-lifer like me and have been watching all along, but chances are most who jumped back on the bandwagon late last season for the improbable run to a World Series championship have long since lost their pink hats to the closet floor and have replaced them with Patriots pom-poms.

Come to think about it, can you really blame them?  For the majority of the year this has been a boring baseball team to watch.  Struggling to score runs on a nightly basis and since trading two-thirds of their starting pitching staff, it has been a virtual box of chocolates (You never know what you’ll get, right Forrest?) every night on the mound. (That is if you don’t count the newly reborn Clay Buchholz, which I don’t.  He is dead to me.  Dead.)

Finally there is a reason to tune in and pay attention again.  If you are like me, the game has become background noise on a nightly basis.  Sure it is on and I’m kind of watching, but truth is I am paying more attention to the game of Monopoly I am playing online against a bunch of robots.

I learned a long time ago that you don’t let the baseball season go easily from my dad who, unlike the spoiled masses in Red Sox Nation, never saw the Sox win it all and died believing in “The Curse”.  He taught me that there are many long, cold winter nights that lie between October and April when even a meaningless tilt between the Sox and the soon to be in town Orioles led by none other than O’s GM Dan “more days in first place” Duquette, would warm the cockles (not to mention toes) of one’s heart as we sit buried in our snow encrusted homes dreaming about next year.

He also taught me how to be a sarcastic and cynical S.O.B., but that is a story for another day.

So my advice to you is this.  Dust off the cap you threw to the floor in disgust at the trading deadline, grab your favorite cold beverage and your favorite munchie or two and tune it to watch the future lead off man for your line-up make his debut tonight.  After all it is technically still summer and I can say firsthand, it is much better than getting your ass kicked by a bunch of robots playing Monopoly.

Kevin Flanagan is a Boston Sports Desk correspondent.  He can be reached at Bsdkevinflanagan@yahoo.com.  Follow him on Twitter @KevinMFlanagan.