Elegant, yet rustic. Ethereal, but primal. Florence Welch is the epitome of complex categorization, with her sweet and demure initial appearance consistently thrashing against a goddess-like strength and raw energy that permeates every sonic molecule of the concert venue. 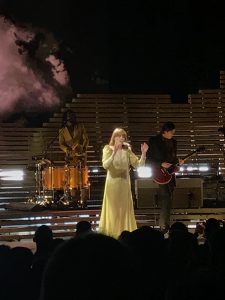 A slow whistling and steady, staccato drum beat builds slowly as the band entered the stage. The beginnings of “Between Two Lungs” starts off the show, which I thought was an interesting choice, due to its slow beginning. Most concerts seem to build upon the excitement of the crowd with their opener, and this song began calmly, like a summer breeze wafting through an open window. But as it progressed, I noticed that this song didn’t respond to the crowd’s energy – rather, it created its own by redirecting the fangirl excitement into something quite new. The heavenly harp melody shone brightly against the almost tribal drumming, which only grew in power with the quickly intensifying vocals. I greatly enjoyed this alternate approach to opening a show, and I felt that it shows the deeper layer of artistry that the band possesses.

The High As Hope Tour is in support of the band’s fourth studio album, and brings with it the characteristic tropes of loneliness that Florence very openly discusses both in her lyrics and commentary in between songs. With vivid imagery and beautiful harmonies, Florence + The Machine brings uplifting messages and tangible emotions that make listeners feel understood and validated right down to their soul.

In an ethereal, gauzy dress somewhere between a victorian slip and a summery beach cover-up, Florence romances the audience with a humble authority that is both confident and shy. She even remarks how she finds singing and dancing on stage easy, but that it’s “the speaking that can be so hard. I’m very shy.” In between songs when the music stops, Florence transforms back into the shy girl that she likely is on the inside – a great contrast to the warrior princess that seems to exist amidst the beautiful yet angsty music that she is known for writing and producing.

After the elegant beginning, the show began to truly take off with one of my personal favorites, “Hunger”, one of the singles off of the High as Hope album. This song also builds deliberately with piano chords leading the way through this harrowing tale of her struggle with an eating disorder. As the drum beat kicks in, the lyrics turn outward, proclaiming that “we all have a hunger”, perhaps not always a physical one, but one that is deeper and more emotional that that. She continues to lament “it’s Friday night and it’s kicking in” – to show that it’s so hard to regulate yourself, especially alone. One of her rawest admittances, this song feels like both a diary entry and a proclamation of encouragement to a crowd of onlookers. My favorite line is “don’t let ’em get you down, you’re the best thing I’ve seen”, because it reminds the listener to never, ever, give up their fight.

As the show continued on, I absolutely loved seeing the way the dual drum sets and pianos collaborated, as well as the unique addition of the harp (a central instrument to the band’s overall sound, but just not something one might typically see at an alternative rock concert). The flashing lights behind the decorative wooden walls seemed to act as a sort of visual percussion, sparkling and shining with the bright sound of Florence’s vocals and almost interpretive dancing. In her song “Patricia”, the words “it’s such a wonderful thing to love” repeat over and over. The sentiment is theoretically simple, but it is that very simplicity that seems to resonate in the hearts of her fans. 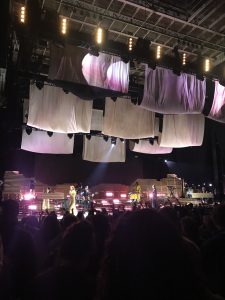 The billowing fabric dripping from the rafters above the stage added an even greater sense of ambiance which was a subtle yet nice addition to the overall experience of the show.

The rest of the show consisted of beautiful songs like “Ship to Wreck”, which questions whether or not the choice to love someone is just something destined to be destroyed. Toward the end of their set, I noticed that the more intense, guitar-heavy head-banging songs were at full power, showing Florence’s impressive range both in vocals and stylistic versatility. As she moved erratically in rhythm with songs like “Moderation” and “What Kind of Man”, the goddess gave way to a seasoned warrior, fighting against her own demons, and slowly breaking free before our very eyes.

At the end of their set, the iconic guitar riff paired up with the powerful drum beat of “What Kind of Man” showed off Florence’s more angsty side. And as she ran through the audience to get to another small platform in the middle of the crowd, she wasn’t afraid to get up close and personal with her fans. Even after returning to the front of the venue, she stood against the barrier and allowed the fans in the pit to reach out to her while she sang the powerful lyrics inches away from their faces. 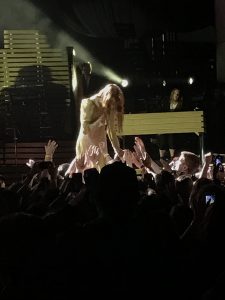 Just when we thought it was all over and the last of the confetti had fallen to the ground, the fans began pounding on the plastic seats and screaming her name, so the band re-emerged for three last songs. My favorite of these was “Shake it Out”, because I really identified with the lyrics, especially “it’s always darkest before the dawn”. As a recent college graduate, I’m unsure of my next move in life, but screaming these lyrics with the entire crowd was amazing. I loved this reminder of how “it’s hard to dance with the devil on your back, so shake him out”. Every word of this song is amazing through, so it’s quite hard to pick just a few stand-out ones. Florence asked the crowd to be a bit of a choir for this song, and after leading them in a quick starting note, she cheekily remarked: “That sounds quite good. I guess Mansfield is very good with pitch.” I’d have to thank my years of guitar lessons and theory studies for that one, I suppose! 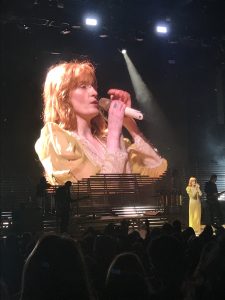 Florence and The Machine seems to exist with the sole purpose of reminding people that life gets hard sometimes, but that’s just an opportunity to get tougher.

With powerful harmonies and true, raw, honesty, Florence + The Machine brings a show that is not one to be missed. With songs that seem like a summer day and warm breezes flowing into a bedroom window amidst the stars, this band is powerfully challenging limitations of genre and creativity. It’s hard to love Florence + The Machine in moderation, but I think it’s okay to just love them quite a lot.