Finally, the Bruins fight back 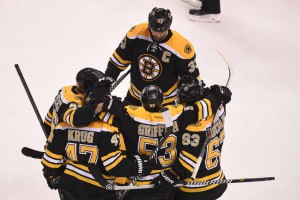 BOSTON – Finally, for a team that has looked and played like a group of dead men skating since general manager Peter Chiarelli sucked the air out of the dressing room by trading Johnny Boychuk just prior to the season; the Bruins showed some life against the Detroit Red Wings at TD Garden tonight, claiming a much needed 4-2 win.  Once again bit by the injury bug with Patrice Bergeron and Milan Lucic out of the lineup for what has been called minor maladies by head coach Claude Julien, the B’s finally refused to feel sorry for themselves and fought for 60 minutes despite the referees’ best attempts at turning the tide in favor of the Red Wings with some brutal penalty calls.

Let’s not get ahead of ourselves; the problems that plague this Bruins team are still very real.  The gaping hole on the right wing of the first line is still very much a problem that needs to be addressed, and the lack of size that exists throughout the lineup – both up front and on their backend – is something that has taken away their previous identity as the Big, Bad Bruins for the better part of the past decade.

The fact of the matter is up until tonight, the team that built its reputation on character in the locker room and fight on the ice has shown little of either so far this season. Given that their work ethic and personal pride was challenged after bowing meekly in Columbus against the Blue Jackets on Saturday night in a 6-2 loss resulted in much needed strong performance against a division rival, the results can only be viewed as much needed movement in the right direction.

One thing that was very obvious, especially early in the game, was just how much a healthy David Krejci means to this Bruins team.  Slotted in the vacant spot created by Bergeron’s absence between Brad Marchand and Reilly Smith, the B’s slick center was in the middle of the team’s strong start in the first period and later assisted on Seth Griffith’s power play goal in the 3rd period.

The physicality and play making ability that Krejci brings to the team is often and easily overlooked.  When paired with a couple forwards that actually seem to know how to find the back of the net without the use of Mapquest or a GPS, it gives one hope that if the GM can figure out a way to get him a right wing before the trading deadline, that things might just get a little brighter in what has been a season of gloom thus far in the Hub of Hockey.

And while it was only a game and things could change should the Bruins remain without Bergeron and Lucic against the Toronto Maple Leafs on Wednesday night at the Garden, it was interesting Krejci was able to adjust to his new linemates, while Lucic has struggled mightily all year without proficient pivot man. It makes you wonder what the Bruins might be able to get in return should they try to trade Lucic and his over-inflated $6 million salary cap hit before the deadline.

It is a start and nothing more.  For the first time all season the Bruins showed that they are not simply willing to lay down and let the opposition walk all over them.  They faced adversity with a snarl that has been missing since they bowed out of the playoffs prematurely last May against the Montreal Canadiens at home in game 7 of the second round in the quest cut short for Lord Stanley’s Cup.

There is work to be done by the front office, there is no doubt.  But for the first time all year, the players in the locker room showed that they are willing to do their fair share, something that was a big question so far this season.

The question that remains is whether the general manager is willing, or able, to do the same for his team.