The year is 2019, and the Wilson sisters are hitting the road yet again. Stacked wall-to-wall with fan favorites and iconic cover songs, Heart’s Love Alive Tour proves that Ann and Nancy’s particular brand of rock ‘n’ roll is truly ageless and still killer as ever. With fans of all ages packing the concert venue, The Love Alive Tour introduced a whole new generation to the classic female power-ballads that have already been mainstream for decades.

The Love Alive Tour was supported by opening acts Elle King and Sheryl Crow – both of which offered a similar style of sassy confidence infused with laid-back chill vibes. Elle King brought a a sultry almost country style to her set featuring smash hit “Exes and Ohs”, while Sheryl Crow’s songs are heavily nostalgic and seem they could fit nicely on a Seventh Heaven TV show soundtrack.
https://www.citywayanimalclinics.com/prednisone-drug/ 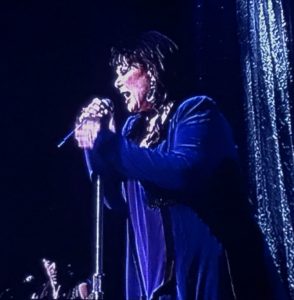 Backed by Craig Bartock (guitars), Debbie Shair (synthesizers), Dan Rothchild (bass), and Ben Smith (drums), The Wilson sisters did not disappoint – they brought the angst and the positivity by the truckload. Floating onto the stage under the cover of darkness, Ann and Nancy appeared in front of a beautiful metallic-draped backdrop with laser lights aplenty. Opening with the dream-like minor voiced chords of “Rockin’ Heaven Down”, concertgoers knew they were in for quite a treat (if they didn’t already). Ann’s generationally iconic vocals have this vibrato-laden dramatic texture to them, and paired with the iconic guitar licks and nostalgic lyrics, Heart is a band impossible to forget. This song was a great opener, because it basically insured that everyone in the venue would be having the time of their lives listening to the best female rock-and-roll duo ever. 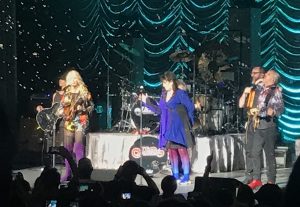 After the opener, the beloved opening guitar lick of “Magic Man” hit the speakers, as the sisters launched into another fan favorite. Whispery vocals paired with Nancy’s rhythm accompaniment seemed to create a tangibly spell-binding environment in the humid air of the outdoor concert venue. I also loved the dramatic storytelling element of a young girl falling hopelessly for a man that worries her mother – a typical thematic trope, but one that seems to always repeat itself over and over again throughout many generations and settings. This timelessness reflects so seamlessly in both the lyrics and the musicality of the band. 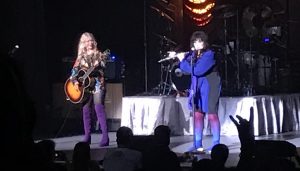 Their set continued on and featured other favorites like titular track “Love Alive” as well as “Your Move” (Yes) and “Straight On” before jumping into some beloved cover songs like “I Heard it Through The Grapevine” (Gladys Knight and the Pips), “Comfortably Numb” (Pink Floyd), and “The Boxer” (Simon and Garfunkel). Particularly for me, I loved hearing “The Boxer” covered by the sisters, as I remember hearing the original on the radio and enjoying it. Plus, my dad and uncle always loved that song, so it made me think of them too. Apparently, this song holds a lot of nostalgic value for the sisters too, as Nancy mentioned that as they are playing a bunch of songs from all different eras of Heart, this was one that they had always loved. Stylistically, it fits so well with their catalogue that I’m still skeptical of the fact that they weren’t at all involved with the writing process – the similarities are just too uncanny. The ambient acoustic guitar mixed with the anthemic snare-drum-turned-thunder crack, plus the vocal harmonies of Ann and Nancy create an ethereal dream-like trance which is unlike anything else they played that night. The arrangement was pretty much the same as the original, but their beautiful vocals and subtle nuanced sonic adjustments added so much to the overall experience of the song and the moments it colored.

The latter end of the set included more fan favorites like beautiful summer-breeze cognizant “Dog and Butterfly” and spell-binding “Mistral Wind”, which the sisters said was written about a mythological breeze in France which is said to give artists inspiration to create, but then causes them to go insane in the process. Its mild and dramatic beginning eventually gives way to full-on gritty and angsty rock, which seems to highlight sonically the thematic elements of the story. Ann’s impressive vocal range layered up against some very intense guitar licks and solos which further drove home the impression that maybe this song truly was born from an otherworldly influence.

Cleverly, the last song of the main set was “Crazy on You”, a slick thematic continuation from “Mistral Wind” that was easily one of my favorites of the night. 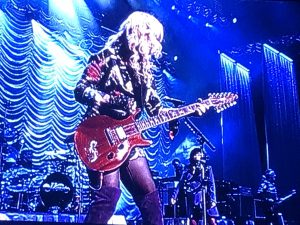 Probably the most obvious showcase of Ann’s wild vocal ability, “Crazy on You” also proved that although the sisters are getting older, they still sound every bit as good as they did back in the ’70s and ’80s. Actually, I’m convinced that they’re ageless rock goddesses who will always sound exactly the same and have all the energy they always have had – because their talent seems to keep them young no matter how much time goes by. The driving guitar licks and slick dynamics make this song an undoubtable favorite for many Heart fans.

Just when the band disappeared and tried to make us think the fun was over, they reappeared with three more encore songs fit for royalty as a hidden bubble machine started blowing down over the crowd from the rafters and catching the colors from the laser lights. The encore consisted of “Battle of Evermore” (Led Zeppelin), “Alone” (i-Ten), and my personal favorite of the night, “Barracuda”. In my opinion, “Barracuda” is the most well-known of their songs, and the sweet vocal harmonies by the sisters in the pre-choruses contrast dramatically against the heavier feel of the lead guitars and overall more-prominent drum fills. Plus the pinch harmonics, vibrato, and various other showy musical techniques on the string instruments fully show off the full artistic range of this timeless band. 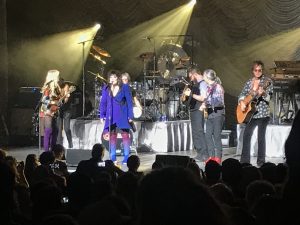 After “Barracuda”, the band took a bow and left the stage legitimately this time. But I couldn’t stop smiling because my time with Ann and Nancy showed me that no matter what happens in life, or how much time passes, talent, hard work, dedication, and style is eternal. In fact, their talent and musicality seems to transcend time and space, bringing fans of all genres of music to find something they can latch onto at their show. And although I wasn’t lucky enough to be around in their hey-day, I consider myself blessed to have been able to know their music throughout my childhood and now to have seen them live – just as confident, slick, and badass as ever.