Even with perhaps the most flawed team in the nearly two decades of Brady and Belichick, the wiseguys are keeping the window ajar for the Patriots to make a Super Bowl run

With seven seconds left and a five-point lead, the Patriots looked like they were about to do what few teams based out of Foxboro have done, come out of a trip to Miami with a win over the Dolphins.  All they needed to was to keep Ryan Tannehill and the Fins offense out of the end zone as they began what was seemingly was a perfunctory play to kill the clock.

Instead, as Pats fans have been reminded of too often following their team’s brain fart(s) for the ages following the unexpected outcome, the so-called “Miracle in Miami” pretty much ended any hopes of claiming the top spot and home-field advantage in the AFC for the NFL’s second season this January.

The head-scratching loss put the once proud Patriots two games behind the Kansas City Chiefs in the conference and tied with the surprising Houston Texans for the second seed – and a first-round bye – at 9-4 with three games to play.

And while the self-inflicted defeat may have been a gut punch to spoiled fans of the franchise that has been reborn under owner Robert Kraft, it didn’t do much to change the oddsmakers opinion that the five-time Super Bowl Champions are still considered to be one of the favorites in the NFL’s junior circuit to play for yet another Lombardi Trophy this coming February.

A quick glance at Sports Betting Dime’s weekly Super Bowl Contender Tracker shows, the Patriots and Chiefs entered last Sunday as co-favorites to make it to the Big Game in Atlanta.  Kansas City’s overtime win over the Baltimore Ravens at home combined with the Patriots implosion in the final seconds in the south Florida sun placed Patrick Mahomes squad slightly above the Tom Brady led Pats as favorites to head down to Dixie in just under two months. 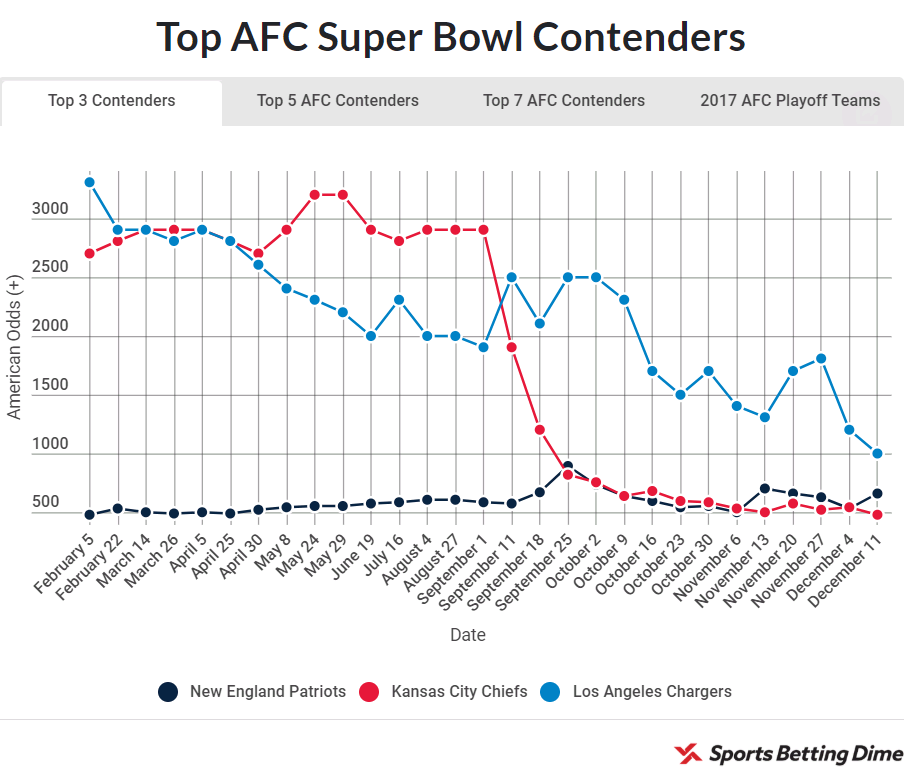 This will likely change again this week with Los Angeles Chargers pulling out a last minute victory on a two point conversion and handing the Chiefs their fourth loss of the season, thereby ratcheting up what is already a tight race for the top spot in the AFC.

And while that may give some football fans in New England a much-needed boost following the breakdown by the formerly best-prepared team in the league when it comes to situational play on the gridiron, the truth is that Patriots fans got a glimpse of the future of the franchise once this nearly two-decade magical run comes to a screeching halt.

The Belichick and Tom Brady led Pats did not lose to a better team on Sunday, they beat themselves.  And the two biggest MVP candidates for Miami’s miraculous victory were none other than the Hooded One and the GOAT himself.

Brady’s inexplicable decision to take a sack with time running down and no timeouts in the red zone in the first half was only rivaled by Belichick’s inane choice to have an obviously less than 100% Rob Gronkowski as the last line of defense on a play that Miami had no business scoring on to end the game.

Bad decisions by quarterback and head coaches are the reason that the team that calls Gillette Stadium home has gone on an unprecedented two-decade run of dominance, not the other way around.

Or at least that’s the way it used to be.

It is widely believed among those who have followed the franchise for the last 20 years or more, that this is one of the weaker teams of the Belichick/Brady era.  Their defense – that for some time now has had a “bend-don’t-break” philosophy – is terrible against the run, something that the Dolphins took full advantage of as a fossilizing 35-year-old Frank Gore gouged them for 92 yards on only 12 carries this past Sunday.

Their offense – while still potentially explosive – has a 41-year-old signal caller that is finally beginning the decent that many around the league have hoped for seemingly forever, and with Gronkowski at times a shell of himself and Julien Edelman both approaching the end of very productive careers, the team that Bill built is on the shakiest foundation it has had since Pete Carroll prowled the sidelines of Foxboro Stadium back in the day.

And while most Patriots fans will point to the wiseguys in Vegas calling their club a contender to make it to Super Bowl LIII for the third straight year, it is much more likely the beginning of the end showed its ugly face in Hard Rock Stadium to the delight of the other 31 NFL cities across the country.

Sorry to tell you Pats fans, the end is near.  You can bet on that.